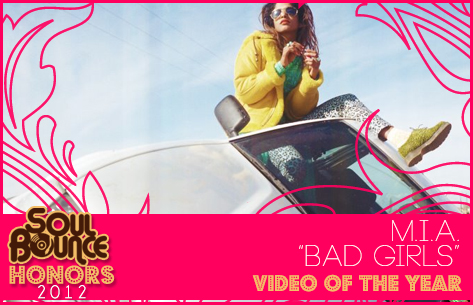 After the trippy worst-of-the-Web collage that was the "XXXO" video, you would be forgiven for assuming Maya
"M.I.A." Arulpragasam
was giving in and going the full sexy-hipster monty
with her visual approach going forward. But mere hours after the premiere of
her featured appearance in Madonna's
"Give Me All Your Luvin," she reteamed with director Romain Gavras (who directed her controversial "Born Free" video)
for "Bad Girls," the lead single off her third album, Matangi. I remember being on a working vacation in when, after a meeting, a young
songwriter asked if I'd seen the "Bad Girls" video. I hadn't. On his face was a
mix of awe and residual numbness as he said "You need to - it's like seven
videos at once."
Center
After the bounce

While there isn't a lot of variation in the sets used (the
entire clip was shot on location in an arid Moroccan expanse), he was right in
the amount of visual stimulation offered by M.I.A and Gavras. From start to
finish, the video is an interesting oscillation between the perpetuation and
subversion of Arab stereotypes. Its first shots show keffiyeh-wearing men in
dusty terrain, and Arabic-scrawled walls of crumbling structures. But we're
soon presented with women, veiled to differing degrees in niqab and hijab.
Their bodies are completely covered, but in the most outrageous silks, from to
cheetah and leopard prints, to Burberry plaids. They are luxuriously adorned,
but menacingly sexy as they sway to the song's Danja-crafted beat. Clearly, these are not the Arab women we're
used to seeing in contemporary western media. As you start to warm to this new
imagining of empowered women expressing their individuality through their
coverings (rather than under them, as in the egregious-even-as-entertainment Sex and The City sequel), they suddenly
raise assault rifles. If these aren't the bad girls the song speaks of, I'm not
sure who qualifies.

What follows is an orgy of mindblowing shots, referencing
the decades-old Saudi desert drifting and sandal skating stunt subcultures.
Gavras draws parallels between majestic Arabian horses and the stunts these
Arab youth perform in their cars, somehow managing to make slo-mo feel
breakneck. It's a fantastic viewing experience that, independent of any
cultural message, absolutely delivers on the "live fast, die young" refrain of
the song. But Arulpragasam isn't one to shy away from making a statement. The
video seems at least partly aimed at the Saudi ban on women drivers, showing
cars driven by both sexes executing the stunts. One shot especially
multilayered in subtext shows a woman in the driver's seat rearing to go, first
stopping to adjust her hijab so as to hide the lower half of her face. What is
often viewed as a sign of repression is now shown as the symbolic equivalent of
John Rambo knotting his bandana before going into battle.

Gavras has stated that this was meant to be a love letter to
Arab youth culture, packing in as many references as possible into one
four-minute clip. Part of why he's able to accomplish this (and in so doing,
create a universally accessible experience) is the avoidance of the music-video
cliché. Despite the song's title, there's no Beyoncé-style battle of the sexes on display - both sexes march
together (quite literally, in one especially kick-ass shot) as equals and
allies. The costuming is elaborate, but is neither sexualized nor a fashion week
checklist. And best of all, it's a car-porn video that completely eschews
high-end automobiles, instead showing the kids performing these stunts in their
parents' mid-range sedans, as they do in actual Saudi drifting circles.

Naturally, it provoked a great deal of controversy upon its
release. But whether or not its subversion of stereotypes was fully undone by
its reveling in them, and whether her statements on women's rights are muddled
in their messaging, M.I.A. created the year's most compelling and thoroughly
joyful music video. Bad Girls do, in fact, do it well.