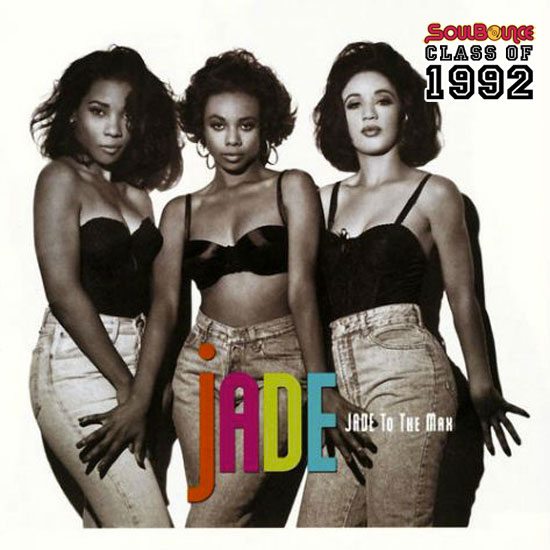 Girl groups were a dime a dozen in the early '90s. In the world of R&B, they were especially prevalent. By 1992, three such groups -- New Jill Swing acronym aficionados SWV and TLC and sophomore divas En Vogue -- had already made their lasting mark on the music with albums that are still talked about to this day. So was there room for yet another female R&B trio to make their debut in such a crowded market? When it came to the ladies of Jade, which consisted of singers Joi Marshall, Di Reed and Tonya Kelly, the answer was a resounding yes. First coming on the scene with their song "I Wanna Love You," which was featured prominently in the Kid 'n Play comedy Class Act, Jade showed that they had the vocals, looks and sex appeal to carve out their own place in R&B's crowded landscape. And their platinum-selling 1992 debut Jade to the Max showed that these ladies had what it took to make a name for themselves.

Speaking of "I Wanna Love You," it was the group's first hit, racing to the top 20 of the Hot 100 and the top 10 of the US R&B charts. While a spectacular feat for a new act, it still did little to differentiate them from other groups. Even the song's accompanying video traded in the same tomboy-chic vibe their contemporaries TLC and SWV had made popular. That would all change with the release of their second single, the infectious "Don't Walk Away." Their highest charting single ever -- it peaked at No. 5 on the Hot 100 and No. 2 on the R&B charts -- "Don't Walk Away" paired their sweet, honeyed harmonies with a hard-hitting hip-hop beat to great effect. For the video, the trio finally wised up and flaunted their sex appeal much more apparently, rocking cropped collegiate sweatshirts, short-shorts and boots for the majority of the clip.

"Don't Walk Away" and "I Wanna Love You" set the tone for the album's first half. There, tracks like "I Want 'Cha Baby," "Out With the Girls" and "Hold Me Close" each married kick-drum heavy beats with sensual instrumentation and come hither vocals that lured in the listener. The tone for the album's second half, though, was set by the group's next two singles. "One Woman," a mid-tempo which was strikingly similar in tone and theme to Karyn White's "Superwoman," asserted that the ladies were looking for a man that could show how much he cared. "Looking for Mr. Do Right" was the prerequisite quiet storm jam that every album of the time had to have. Still, the ladies evoked enough emotion and sensuality to make it believable (enough so that it tied "One Woman" on the R&B charts, with both peaking at No. 16). However, the true bedroom banger of the album was the sexy "Give Me What I'm Missing." The seductive slow jam played to the ladies vocal strengths and the slinky bass line would put anyone in the mood for love.

Even with their chart successes, many accused the trio of being just another interchangeable collection of singers. While it's true that they had little input on the writing and production side of things (Joi Marshall, who had a hand in "Give Me What I'm Missing," was the only member to receive a writing credit), such a statement denied just how great the music and vocals of Jade to the Max were. To speak to this fact, the ladies ended the album with two covers originally sang by '70s trio The Emotions. While not containing the same vocal fireworks, Jade's cover of "Don't Ask My Neighbor" is still very capable, capturing the longing and sincerity of the original. Their cover of "Blessed," however, showed that these ladies were more than just a producer's muses. Updating the original with a more modern feel, the ladies let their three-part harmonies go to church and perfectly close the album.

Though Jade burst on to the scene with a bang, they ultimately wouldn't stand the test of time like their contemporaries. Their second studio album, Mind, Body & Song, though yielding two moderately successful singles, failed to match the success of Jade to the Max and nothing else was heard from the group after, though Joi Marshall and Di Reed have each dipped their toes in musical waters separately -- Joi launching a independent gospel career and Di doing backup for artists like Rod Stewart. While their time at the top may not have lasted as long as they (and their fans) might've liked, Jade to the Max remains a testament to a fun, flirty and bold sound that still gets parties moving 20 years later.