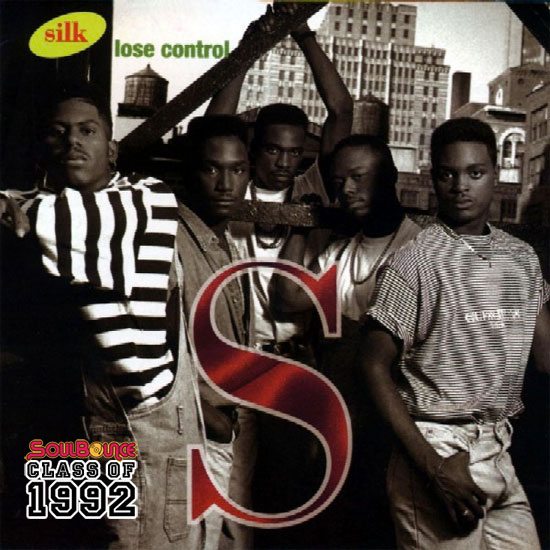 Once upon a time in a land far far away -- aka the early '90s -- you could throw a rock in any direction and hit a male R&B group. There was New Edition, Guy, Boyz II Men, Jodeci, Tony! Toni! Toné!, Color Me Badd, H-Town, Troop, After 7 and a slew of other groups who ruled the airwaves like kings.1992 alone was a year that saw debuts from new male R&B groups Portrait, Shai, R. Kelly & his backup dancers Public Announcement and Silk. The five-part harmonies of the latter came through loud and clear on their chart-topping album, Lose Control.

They may have taken their name from one of the finest of fabrics, but Silk's sound was anything but smooth easy listening. Group members Johnathen "John-John" Rasboro, Jimmy Gates, Gary "Big G" Glenn, Timothy "Timzo" Cameron and Gary "Lil G" Jenkins were GRITS (gentlemen raised in the South) who brought some grit to the R&B of the day. They formed in Atlanta and were discovered by Keith Sweat who signed the quintet to his imprint and executive produced and co-wrote the majority of the songs on Lose Control. Sweat would also lend his voice to the group's first single, the hip hop soul-infused "Happy Days," that would be the first of four charting songs from this album. The James Brown "The Payback" sample gave "Happy Days" its backbone, but it was Lil G's soulful ad-libs that made that backbone slip. Lil G even overshadowed bossman Keith Sweat and certainly made you disregard the forgettable rap by The Riddler. (Who? Exactly.)

Gary Jenkins was the standout and most distinctive vocalist of Silk, but thankfully he wasn't the only one who could sing and he shared lead with other group members. They all took a backseat to Gerald Levert and Sean Levert, however, who joined the fellas on the album cut "Don't Keep Me Waiting." The guys held their own and blended well with the brothers Levert. It's surprising that this song wasn't released as a single, but the tracks that were more than made up for this oversight.

One such was the breakout hit of this album and the biggest song of Silk's career, "Freak Me." The sexy bedroom jam rolled in like a quiet storm to hit No. 1 on both the Billboard Hot 100 and Hot R&B Singles charts, and its success partially led Lose Control to go double platinum. With suggestive lyrics like "Let me lick you up and down," "Freak Me" was the perfect companion song to SWV's "Downtown" from their '92 release It's About Time. A sexual evolution with low-key explicit R&B songs about oral sex was happening right before our very ears.

"Freak Me" wasn't the only track to go into the slow jam hall of fame from this album. The third single would be the title cut "Lose Control" and that's precisely what would happen whenever this piano-driven ballad would come on. From the opening harmonies to Lil G once again stealing the show, "Lose Control" is one of the sexiest apologies ever set to music. These two songs still go hard in the paint and will never not have a spot on any sexytime playlist I create.

Silk didn't just have a one-track mind to the bedroom, however. Other standout tracks were the sticky sweet declarations of love on subsequent singles "Girl U For Me" and "It Had To Be You." The New Jack Swing-a-ling of "Baby It's You" and the sleepy ballad "I Gave To You" were where the fellas started to lose some steam, but they were still listenable tracks. The only skip-worthy song then and now is "When I Think About You," which sounded like a BBD reject that even Lil G couldn't save.

Silk's Lose Control was one of the surprising R&B success stories of 1992 and the biggest album of the group's career. Three subsequent releases didn't yield any hit songs on the level of "Freak Me" (although 1999's "Meeting In My Bedroom" from Tonight could've been a contender). In 2002, Gary "Lil G" Jenkins decided to leave the group, and Silk went on to record two more albums as a quartet with dismal results. Rumor has it that Jenkins is back in the Silk fold, and they are working on a reunion album. There's very little information and no release date for that upcoming project, but if it does happen we can only wish that they recapture the lightening in a bottle that made Lose Control so special.