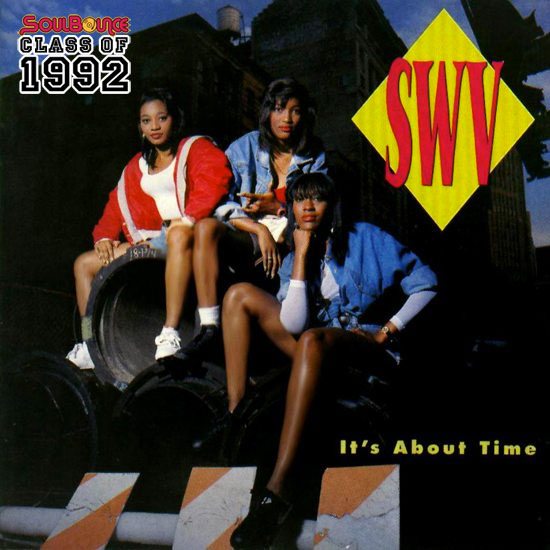 The first half of the '90s was the second golden age for girl groups in music -- with everyone from Total to Brownstone to Changing Faces (and maybe even MoKenStef) crafting the sound of the era. But 1992 was the year the standard was set with big debuts from upstarts Jade, TLC and Sisters With Voices --  or SWV, if you're nasty. Originally a gospel group formed in 1990, Tamara "Taj" Johnson, Cheryl "Coko" Clemons and Leanne "Leelee" Gamble (having lost  first rights to the band name TLC despite having the right initials), found themselves signed to RCA Records after their demo tape caught the attention of New Jack Swing pioneer Teddy Riley. Their first single, the New Jack-inflected "Right Here" was a modest hit, cracking the Billboard R&B Top 20. But the follow-up "I'm So Into You" was the group's real coming out party.

With its simple, sing-along-friendly "You're so fine / You blow my mind" refrain squarely aimed at America's middle schools, the feel-good bounce of "I'm So Into You" established SWV among the key faces of New Jill Swing. It became their first top 10 single, and would go on to define the group for years to come. By the time third single "Weak" had completed its run, their debut album It's About Time was an unqualified success, and America had taken notice. With its lush vocal harmonies (and gorgeously shot video), the ballad was a triumph in emotional narrative, hitting number one on both the Billboard Hot 100 and R&B charts.

But their look got almost as much attention as their sound. While their harmonies clearly referenced their gospel roots, their image redefined what we expected of three girls from church. Though they had the little skirts and leather jumpsuits, they didn't feel like they were pushing sex-appeal (like Jade). On the other hand, they also weren't trying too hard not to (like TLC). And while reigning girl-group En Vogue, riding high off the success of their just-released Funky Divas album, sought to continue the legacy of black style icons Lena Horne and Dorothy Dandridge, SWV felt perfectly at home in their round-the-way look. With their doorknocker earrings and signature Freddy-Krueger-meets-Basquiat manicures, they became trendsetters in their own right (most notably bringing riding jodphurs to the streets, thanks to the hugely popular "Right Here" remix video).

But unlike the other newly-minted Jills TLC, nothing about their presentation felt forced or gimmicky -- no easy task, considering the multi-layered image complex they were working against. As a genre, New Jack Swing was a harder-edged cousin to R&B music, meant to bridge the gap between the emotionally present (read: ostensibly "soft") R&B singers and the altogether rougher hip-hop acts. Rather than deny their ovaries, the ladies put out an album heavy on keyboard leads and programmed drums that (especially on cuts like "Think You're Gonna Like It" and "Right Here") could have been recorded by Guy or Public Announcement. They maintained a sexy, totally accessible femininity layered over a streetwise edge that made It's About Time one of the more unisex-friendly R&B albums to come out at the dawn of the Gangsta Rap era. In true New Jack Swing style, they handled their own rapping duties -- most notably Taj's Grand Puba-conjuring turn on the raunchy "Blak Pudd'n" and the raucous party cut "SWV (In The House)." With their brassy delivery (and Coko's formidable talons), there was no doubt that they were tough enough to hang with both the New Jack guys, and -- as they'd later prove on an epic remix -- the rappers the NJS fellas wanted to prove they could roll with.

And yes, let's talk about those remixes. It's About Time is emblematic of its time, especially for the quality and significance of the remixes it spawned. Despite its abundance of gorgeously arranged ballads that perfectly balanced the party atmosphere of the album, some of the strongest slow-burners got the full 180 on reworkings that took them from bedroom to dance floor. From "Downtown" to "Anything," the '90's tradition of making a remix an even bigger event than the original record is something that, though tragically missing today, is all over this album, giving the set new commercial legs with each single. And this album was the very definition of "legs" (a term only Adele and Gaga, Our Lady of Focus-Group Edge can understand in today's singles market). A year after its initial turn as the lead single, "Right Here" received new life in the summer of 1993 with the Pharrell-assisted "Right Here / Human Nature" remix -- featuring vocals resung to match the mellow, contemplative tone of the Michael Jackson hit it sampled. As part of the soundtrack to the 1993 blockbuster Free Willy, it peaked at #2 on the Billboard Hot 100, eventually spending a stunning 54 weeks on the chart.

"Anything," another scorching quiet storm number, was all but eclipsed by its 1994 remix on the all-star soundtrack to the basketball flick Above The Rim (back when urban movies were really just a delivery system for killer soundtrack albums). The video played a major part in the top 20 success of this, the album's seventh single. Now secure in front of the camera and in their success, we saw a raucous (and very, very handsy) SWV having an absolute ball -- the song and video combining to create one of the most exuberant musical moments of the '90s. And its re-remix, featuring the Wu-Tang Clan, rests comfortably in the pantheon of the greatest R&B-hip-hop remixes of all damn time. With all respect to Mariah Carey, SWV was the first to let the world know the subversively euphoric magic created by the collision of R&B and ODB.

Two decades later, the R&B girl group is all but gone -- contemporaries TLC halted by tragedy, one-time opening act Destiny's Child disbanded after serving its purpose as Beyoncé's star-making vehicle, and the demand for multi-part harmonies likely killed altogether by Nicole Scherzinger and her daisy-chained paper dolls. Thankfully, SWV is back among us, a little older, a lot wiser, but thankfully still very much able to murder a three-part harmony, as they proved on their latest set I Missed Us. They may not get discussed as much as the iconic En Vogue or the larger than life TLC, but they managed to influence the course of contemporary R&B more in one album than many present-day acts will ever really know.

SWV It's ABout Time [Amazon][iTunes][Google Play]


TAGS:  brownstone, Class of 1992, en vogue, michael jackson, swv, teddy riley", tlc
Previous: The Mixologists: Keyknow’s ‘War Of The Hearts’ Next: Morning Soul: Never Knew What I Did Not Say