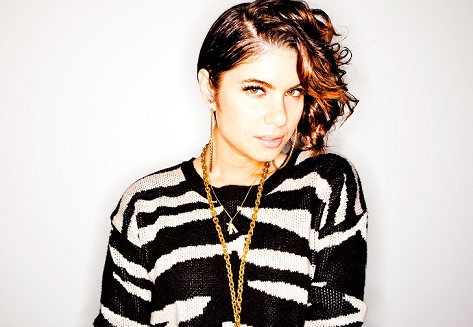 Where oh where has Leah LaBelle been? After making everyone take notice with "Sexify" last spring and even releasing a host of other songs over the summer, it seemed that Leah all but disappeared. And, while her doing her best Teena Marie impression at last year's Soul Train Awards was great to see, it still seemed like Leah was on the fast track to obscurity. And now we have another sign that Leah's not yet done for, her newest track "Lolita." Once again tapping producer and mentor Pharrell Williams for his behind-the-boards skills, "Lolita" finds Leah back in an '80s soundscape as she sings about what her wiles can do to you. While that description sounds dangerously close to "Sexify," this song is crafted from a much darker, grittier sound palette that adds a bit of edge to Leah's sweetly layered vocals and puts one in the mind of crowded dance floors and late nights (if "Sexify" is getting ready for a night out with the girls, "Lolita" is that same night around 2 a.m.). This might not be the Lolita that Nabokov imagined (Leah is a fully grown woman, after all) but it does embody the alluring essence of the literary temptress. Does the release of this single mean we're any closer to hearing Leah's debut or is it just another tease? That's yet to be seen, but the as-yet-untitled set will reportedly hit shelves later this year on Jermaine Dupri's So So Def Records.