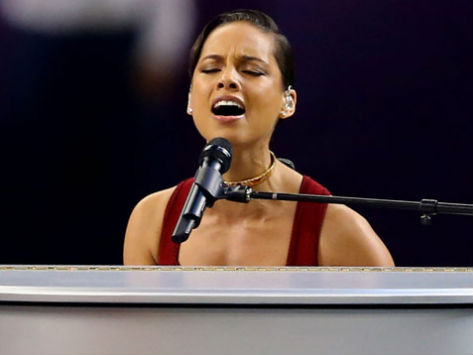 Super Bowl XLVII turned out to be one hell of a game with the Baltimore Ravens emerging as the victors over the San Francisco 49ers once all was said and done. Football was clearly what everyone was tuned in for, but during the telecast viewers were also treated to a trio of performances by a few R&B divas. Alicia Keys, Jennifer Hudson and Beyoncé all showed up to the Superdome in New Orleans and showed out -- some more than others, that is. Keys kicked the festivities off by singing the National Anthem while playing a white grand piano. After the kerfuffle caused by Bey's Anthem lip-syncing at Inauguration a few weeks ago, Alicia made sure to sing "The Star-Spangled Banner" live, and, although a pleasant, passable performance, it kinda made you wish that she did have some vocal aid. Alicia's voice isn't the instrument that it used to be, and its shortcomings (straining, pitch problems) were unfortunately heard loud and clear here. Overall she was just OK, but for an artist at her level, "just OK" shouldn't even be an option.