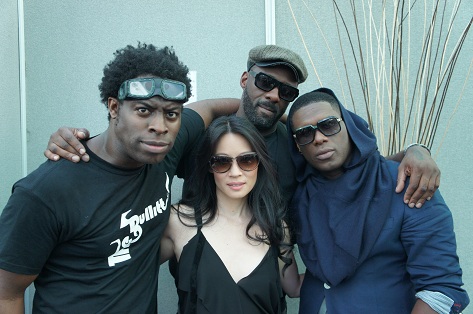 While this year has already been chock full of lauded music, one of the biggest events I'm looking forward happens to be a film: Jeymes Samuel's They Die By Dawn. Not only does its cast happens to be a Black Hollywood who's who (Erykah Badu, Rosario Dawson, Nate Parker, Isaiah Washington, Jesse Williams and Michael K. Williams all star), but the short film happens to be a companion piece for the upcoming The Bullitts album They Die By Dawn and Other Short Stories. This is fitting, as Jeymes Samuel and The Bullitts are one in the same. Over the weekend, Samuel released the project's title track. It features actress Lucy Liu and rap unicorn Jay Electronica, who both previously collaborated with The Bullitts on "Close Your Eyes," and Yasiin Bey (aka The Artist Formerly Known As Mos Def). The track isn't as odd as it might seem, either. Starting off with two minutes of music (complete with whistling and twangy guitar) we've come to expect from westerns, the action really starts when the bass drops and Mos drops a quick verse. The fire is further backed up when musical recluse Electronica spits the first verse we've heard from him in a long while. Liu's contribution here is much simpler, with her simply uttering the song's title dramatically. Though it recently premiered at SXSW, there is no official word on when They Die By Dawn (the short film) will be available for public consumption. However, its musical companion is set to hit stores on June 4th.