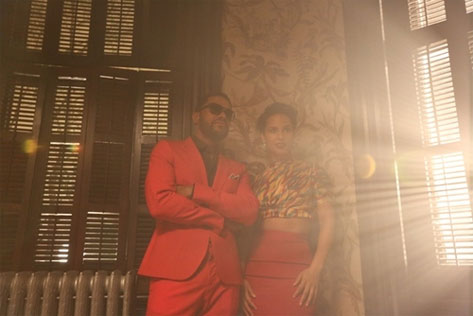 Alicia Keys and Maxwell are hotter then the fourth of July in their music video for their bedroom scorcher "Fire We Make." Chris Robinson gets behind the camera to film a period piece set in old New Orleans in the French Quarter. Alicia works at Battiers Boarding House, and Maxwell is the mysterious guest who checks in. Their attraction hangs in the air like the thick heat surrounding them, but they don't act on in immediately. Instead, they retreat to their respective rooms where they both try to quell their rising desire (and cool off) before the scene changes to a sweaty juke joint and they sing to each other across the room.

The ending was a bit of a let down -- they could have at least given the illusion of relations between Alicia and Max even with Keys being the chaste married woman who is she now -- and the video doesn't quite set off the sex bomb that I'd hoped it would with such sultry source material, but it's just a delight to see Maxwell in action (even if he didn't get any) and looking so very good. I must say, however, that in her solo bedroom scene that I haven't seen a better use of ice since Spike Lee and Rosie Perez got down in Do the Right Thing. See how Alicia and Maxwell make it hot and start a "Fire," even if they don't quite put it out.