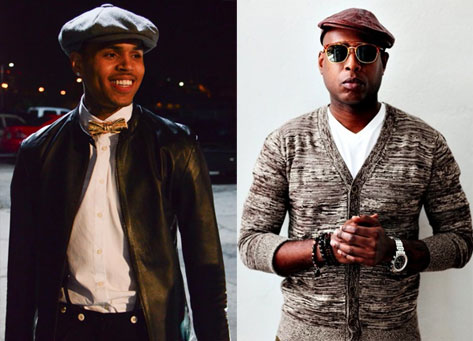 Never in a million years -- or at least since 2009 -- did I think that I'd find myself liking a Chris Brown song again. (Hey, I'm just keeping it 100.) But the sonic pull of his current single "Fine China" has reeled me in. What can I say, the force, it's got a lot of power, and Brown has managed to make the closest thing to a Michael Jackson song that I've heard in ever and probably has Ne-Yo rocking back and forth in the studio rethinking life. Word is that Breezy is trying to change his image one song at a time, and we'll see how that works out for him when his new album entitled X drops this summer (and if he can keep his wits about him on social media and in the news in the interim). Nonetheless, "Fine China" is a bonafide jam and it only makes sense that other musicians would want to jump on the track to add their own touch. But who knew that one of the first would be Talib Kweli who assists Brown with a rap attached at the song's beginning on this remix? The combo of Kweli and Brown may not sound like it'd work on paper, but in actuality it's pretty dope as the former spits some bars about a P.Y.T. who has him open. His verse fits in just fine and segues nicely into Brown's vocals. Put this remix in the Win column, and for another winning remix check out SoulBounce fam OhsoKool's unique blend of "Fine China" with Donell Jones' "U Know Whats Up" to keep the ear party going.