Mariah Carey Shows She Isn’t A Morning Person On ‘GMA’ 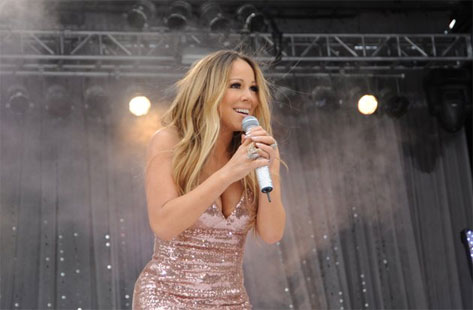 As part of the promo push for her still-untitled upcoming album, Butterfly Princess Mariah Carey kicked off the Good Morning America Summer Concert Series with an event that was more fall than summer and more improv stand-up/performance art than concert.
Center
After the bounce

Anyone who lets MC speak about herself for long enough will eventually learn she is not about that morning life. And it was clear the 6 am start to the festivities apparently did a number on the diva who let some colorful language slip, experienced a dress fastener pop and provided much unintentional comedy.

Carey remained her usual charmingly self-deprecating self, trading one-liners with host Lara Spencer and singing her sleep-deprived thoughts to featured vocalist/current meme king Miguel on "#Beautiful." While isolated vocal issues clearly forced a less-than-fluid approach to her patented runs, she acquitted herself nicely on her hits "Always Be My Baby" and "We Belong Together." Besides, no matter how she sounded on "#Beautiful," she will never be as bad as her dancers; I want her choreographer's job.

Watch below and send Mimi warm thoughts of ginger tea, honey and lots of rest.