What Do We ‘Think’ Of John Legend & Rick Ross’ New Video? 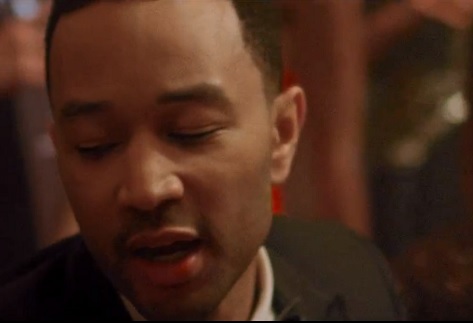 I was kind of lukewarm about John Legend's upcoming set Love in the Future until I heard his single "Who Do We Think We Are." From its well-used sample of "Mr. Big Stuff" to the smooth old school groove it rides on, it caught my attention and held it (even when Rick Ross -- who is coming for Jay-Z's lazy guest rapper spot -- phones in his yawn-worthy 16 bars). That's why the video for the track has me more than a bit confused. It finds a suited and booted John lounging lasciviously in a mansion during what looks like a slightly tame scene from Eyes Wide Shut. Following in the footsteps of Robin Thicke's "Blurred Lines," the video's explicit version (you can view the more tasteful version here) features a bevy of model chicks running around topless as the rest of the clothed (and male) party guests chill and enjoy the show. While the nudity actually fit within the world of Thicke's raunchy, sexual innuendo loaded "Lines," here it feels more like a gimmick. I'm no one's prude by any means but, plainly put, there is nothing in the song that warrants the exorbitant amount of nipple we see on display here. It's disappointing, too, because minus all the bare-breasted distraction, the clip has a style and feel that is visually interesting. But whatever draws eyes and attention to Love in the Future's June 25th release date is clever, I guess. If you want to get an eyeful, check out the obviously NSFW clip.

TAGS:  "rick ross, jay-z, john legend, robin thicke
Previous: According To Jaheim, ‘Age Ain’t A Factor’ Next: Tamar Braxton Reminds Us That She’s ‘The One’