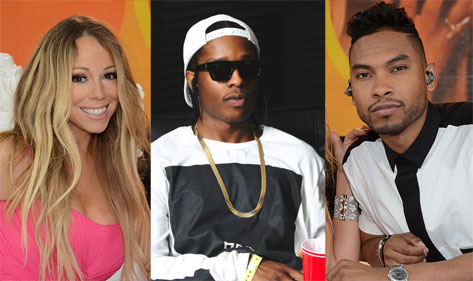 As Mariah Carey wowed the a world newly accustomed to her Diva-Matriarch Idol persona with her sexy turn in the video for her Miguel duet "#Beautiful," the buzz was that the track was a contender for the Song of the Summer honor. But as it now seems to have stalled on the Billboard Hot 100 after breaking into the Top 20, Carey is readying a series of five remixes to be released over the next week. The first is basically the original, but with a tacked-on verse from rapper du jour A$AP Rocky and an infuriating drone of ad-libs meant to give the illusion that he and Carey ever breathed the same studio air. This is an underwhelming effort from MC, but hopefully it's just a teaser from the one-time queen of the R&B remix. If her recent Instagram posts are an indication, she's going full-on MC on future mixes, with resung vocals and a new video to take this single all the way to the top. But if we're in for more of this, the entire exercise just isn't worth the effort. Hers or ours.