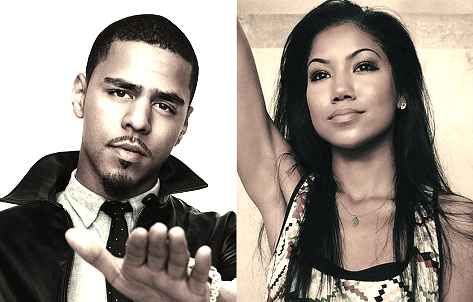 While many will be talking about Kanye West's Yeezus today, let us not forget that another Jay-Z affiliated rapper also releases a project today. For his part, J. Cole has done enough to promote Born Sinner and keep it fresh in our minds, what with releasing track after track and even streaming the album in full two weeks before it dropped. However, if you still happen to be on the fence about Born Sinner (or perhaps were only considering buying the LP's standard edition), here's a little incentive to check out the set's deluxe offering. "Sparks Will Fly," a team-up between Cole and SB fave Jhené Aiko, is one of the bonus tracks for those willing to drop a few extra dollars. The beautifully moody cut focuses on holding on to a relationship even when the fire seems to have cooled. Though I've never really thought about the twosome teaming up, their chemistry actually works quite well, with Jhené's vocal perfectly complimenting Cole's tendency to lean toward the emo. Take a listen to the track below, and pick up the set's deluxe edition at iTunes now. [H/T: SC]