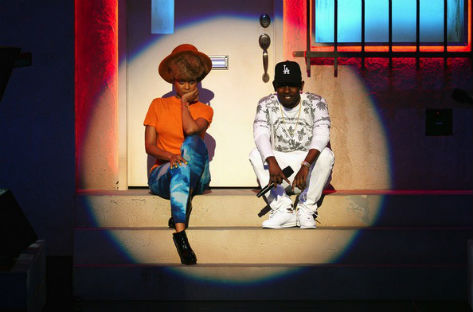 It's no surprise that one of the big winners at the BET Awards '13 was Kendrick Lamar. What was a surprise, however, was the fact that K.Dot missed accepting his first award when he was the next artist scheduled to perform and clearly somewhere backstage. The confusion was quickly forgotten when Kendrick took the stage to perform a snippet of "M.A.A.D. City" before trotting out Erykah Badu to join him on "B*tch, Don't Kill My Vibe." I'm normally on board for any Badu live performance, but something was a bit off about her last night. Maybe it was the painted on, fake freckles? Maybe it was the fact that she sounded like she coulda used a few more hours of rehearsal with the band? Whatever the case, this coupling had the potential to be great and it was just OK and a tad awkward. In spite of this lukewarm performance, if these two plan to collaborate in the future we'll be listening.