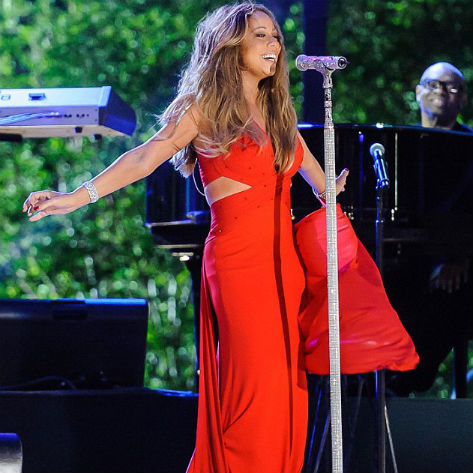 Days after disappointing fans by being one of the few lip-syncing artists at the BET Awards '13 (seriously, the BET Awards) Mariah Carey's pre-taped special for the Macy's 4th of July Fireworks Spectacular aired Thursday night, and we're glad to say she was all (or at the very least, most of) the way live. The diva treated fans assembled in Jersey City, NJ to a mini-concert, belting her way through stellar renditions of "#Beautiful," "Hero" and of course the standard "America The Beautiful."  While the editing was a bit raggedy (a badly-timed edit sometimes made even her spoken intros look lip-synced, and the whole bootleg green-screen montage should merit a round of layoffs), her voice seemed to be in top form, as it often is when she performs before a crowd of fans she knows came solely to cheer her on (American Idol, GMA). One just has to wonder how a veteran as seasoned as Carey is still so seriously debilitated by stage-fright at this point in her career. Such quibbles aside, wave your mini-flag (or leftover drumstick) and listen to one of America's greatest surviving vocalists show us why we expect so much of her.
Center
After the bounce