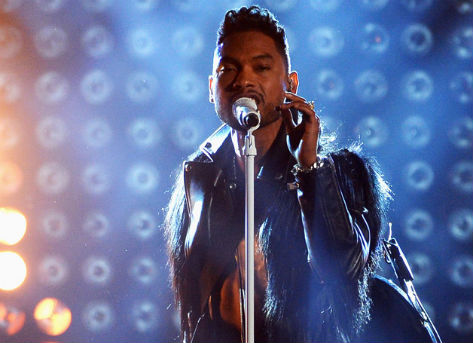 The last time we saw Miguel perform on a major awards show, it didn't have a pretty ending. His ill-fated leap that resulted in the leg drop felt round the world made him the laughingstock of the Internet for a good day or two. So when I heard that he was going to perform on the BET Awards '13 telecast my first thought was that I hope that the audience members had good health insurance. Thankfully for them Miguel decided not to test out anyone's major medical coverage during his performance of "How Many Drinks?" (and even if he got any ideas then BET built a bridge from the main stage crossing the fan pit). Donning a leather jacket covered in the finest of yaki, Miguel warbled his way through the performance high atop a lucite platform before jumping down (he's gonna get enough). This time he stuck the landing and was soon joined by the man of the evening Kendrick Lamar who kicked his rhymes from the song's remix. This wasn't the best vocal from Miguel, but he gets props for singing live and for not sending anyone to the hospital this time around.