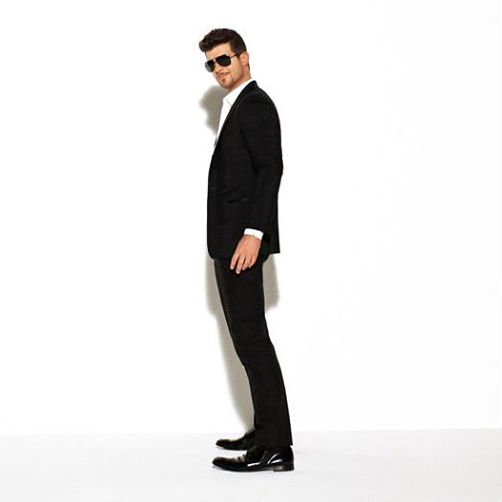 Remember how I kept insisting that Justin Timberlake's been biting off Robin Thicke? I guess that Robin has decided to return the favor. How else do you explain his latest album leak "Take It Easy On Me"? From the synth buzz to the "yeah" ad-libs that I could almost swear are a sample of Justin, the latest listen from Robin's upcoming Blurred Lines sounds like it could be an outtake from Justin's Futuresex/Lovesounds (I'd even venture to say that it's a distant cousin of JT's hit "Sexy Back"). Perhaps that's because it's produced by Justin's chief collaborator Timbaland. And while the soundscape Timbo provides is a new-ish one for the singer, the track doesn't break new ground for Thicke lyrically. Just like in "Blurred Lines," he seems to be chasing tail at a party and coming off as that charismatic guy who walks that fine line between gentleman and pervert. I'm not quite sure if I like this particular sound on Robin, but I can definitely say that it's not as fun as "Blurred Lines" is. Enough about what I think, though. Press play below and form your own opinion.


TAGS:  audio, justin timberlake, robin thicke, timbaland
Previous: Morning Soul: You Gotta Fight It But Why Would You Try Next: Mario & Nicki Minaj Are Up To ‘Something’