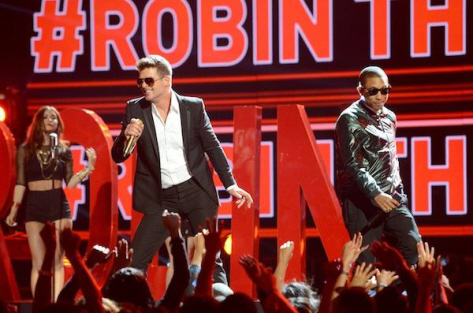 Even though he's been under fire recently for the allegedly "degrading" single "Blurred Lines," Robin Thicke shrugged his shoulders and was cool, calm and collected when he took the stage at the BET Awards '13 last night to sing his #1 jam. To join him, co-horts Pharrell Williams and T.I. also donned the same smooth operator steeze and two-stepping game, bringing the hit music video somewhat to life. Thicke then strolled out into the audience in an attempt to get them pumped up. Some were amused like Janelle Monáe, Olympic gold medalist Gabby Douglas and Thicke's wife, actress Paula Patton, while others in the audience seemed a bit, well, um, comatose. I don't know how other people do things in life, but when a jam like "Blurred Lines" pops on and I'm in the audience of an award show having Robin Thicke inches from me, well, you better believe my rump is outta the seat and getting in the groove. Press play and shake a tailfeather of your own after the bounce.