The BET Awards ’13 Honor Charlie Wilson With The ‘Bomb’ Tribute 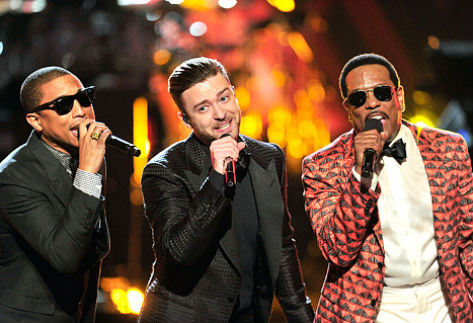 After last year's amazingly good and incredibly moving posthumous Whitney Houston tribute at the BET Awards '12, there was no way that they could top it this year. Thankfully we didn't lose another icon on Houston's level in order for BET to even try. Instead, this year's lone musical tribute went to the recipient of the Cadillac Lifetime Achievement Award who was none other than Charlie Wilson who was present and accounted for at the BET Awards '13 and ready to accept his flowers while he's still here, and talent was in full bloom during the two-part tribute.
Center

Adorned in a headwrap and a sequined bell-bottom jumpsuit that would make any disco diva jealous, India.Arie and her guitar kicked the festivities off with a pleasant but subdued rendition of Uncle Charlie's "There Goes My Baby" before she turned the stage over to Jamie Foxx who dove into The Gap Band's "Yearning For Your Love." Unfortunately it took Jamie a minute to find the right key, but once he did the rest of his performance was a lock and hearing him sing this classic so well made you kinda mad that his original material isn't this timeless. Next up was the national treasure that is Stevie Wonder who put his stamp on the funk classic "You Dropped A Bomb On Me." Sure, he forgot some of the words, but Stevie's random ad-libs are better most people's actual lyrics, so the audience dealt and jammed away.

In between performance blocks, Justin Timberlake came out in his suit and tie to praise Charlie and present him with his award. They exchanged some banter and JT suggested Unc Charlie sing, which made perfect sense since he had in-ear monitors hanging around his neck. Poorly executed segues aside, Wilson hopped on the mic and showed the youngsters in attendance how it's done. He began with his recent hit single "You Are" before being rejoined on stage by Justin who brought Pharrell and Snoop Dogg with him to the tune of the latter's "Beautiful." The party continued with the motley crew running through "Charlie, Last Name, Wilson," "Signs," "You Dropped A Bomb On Me" and "Outstanding." Between Snoop's fuzzy dreadlocs, Pharrell's wayward vocals and Justin being Justin, there was a lot going on during this almost 12-minute set, but one thing is for sure -- Charlie Wilson set it off for it to forever be set last night.