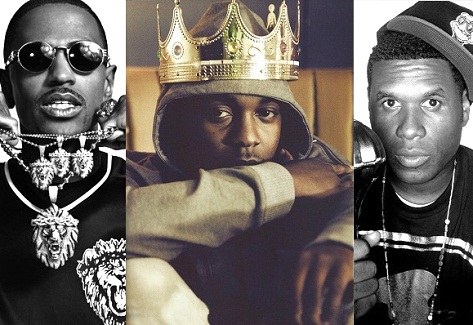 Kendrick Lamar may have been considered one of the new generation of hip hop's rising ascendants to the throne, but after an incendiary guest verse on Big Sean's "Control," it's clear that K. Dot has no intentions of sharing the title. It all started when Sean leaked "Control," an otherwise run-of-the-mill track that won't be making his upcoming set Hall Of Fame due to a sample clearance issue, late Tuesday night and the Internetz (read: Black Twitter) promptly went nuts. That's because, in perhaps one of the ballsiest moves in modern hip hop, Kendrick not only easily bodied both Sean (on his own damn song) and random ass other guest Jay Electronica, the West Coast MC claimed the coveted title of King of New York and then proceeded to call all the rappers of this generation to the carpet and put them on notice ("I got love for you all/but I'm tryna murder you n----s/Tryna make sure your core fans never heard of you n----s). The verbal assault left many questions in its wake: Why the hell would Sean let someone murk him on his own shit? Why would Jay Elec agree to go last after hearing what Kendrick did? Who will be the first to respond to Kendrick's challenge? Why do we not care that the production kinda sounds garbage (Sorry, No I.D.)? However, the most important question is "Who the hell does Kendrick Lamar think he is?" Obviously he thinks he's a force to be reckoned with, and he's right. It seems that while everyone else was content with simply watching the throne, Kendrick went ahead and snatched the crown. [H/T: 2DBZ]
Center


TAGS:  audio, big sean, jay electronica, kendrick lamar, no i.d.
Previous: Terrace Martin Pulls Us Into His ‘3ChordFold’ Next: Luke James Gets ‘Oh’ So Cinematic In His New Visuals