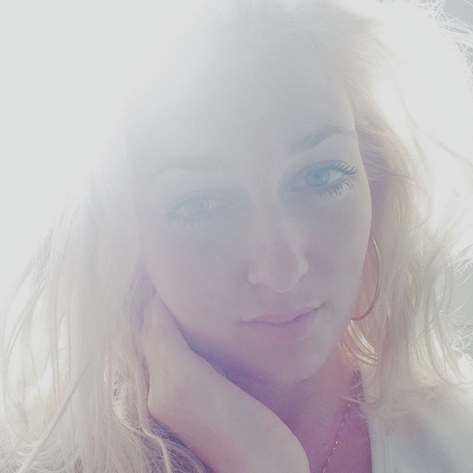 In case you hadn't clued in on it yet, we here at SoulBounce HQ have fallen hard for Scandinavian singer Marie Dahlstrom. She first captured our attention with the dreamy soul soundscapes of "Search" before we caught on to her unique covers, where Dahlstrom pulls popular songs apart and reconstructs them, putting her soul and jazz-inked stamp all over them. As Dahlstrom is world premiering a new song today, entitled "Something Like Nice," we thought what better time to not only pose a few questions to the London-based soul chanteuse but to give producers a chance to show their skills and put their own unique spin on her new track in an exclusive remix competition! Find out what inspires Marie Dahlstrom and get the remix competition details after the bounce.
Center

SoulBounce: How would you describe your sound?

SB: What can music lovers expect from your upcoming EP?

MD: I have a few different projects lined up, a few collaborations and some duets. My next big project will be a longer EP with live instrumentation on most of the songs, like on "Search" and "What's It Gonna Be."

SB: How do you tackle writing a song? For example, does the melody come first or the lyrics?

MD: It's always changes. Sometimes it's the words first and sometimes I have my beat and a general theme of the song and then I just start singing. That's what happened with "Something Like Nice," which I'm releasing today for the remix competition.

SB: Here at SoulBounce we love your covers of popular songs. You've covered an eclectic group of artists from Rihanna to Phil Collins. What artists out there would you love to collaborate with in the future?

SB: What would you say is the biggest setback with being an independent music artist?

MD: The fact that things take a lot of time. And that there's only me to keep myself engaged and structure my days and make sure there's goals set in place for the future. Sometimes I think having a team, can be very motivating -- you know, the feeling that someone else cares as much as you do about moving forward.

SB: What would you say is the most positive factor about being an independent music artist?

MD: I can decide everything myself, my musical direction, who I want to work with, etc. Also, I have learned so much from all this in terms of managing my time, bookings, the band. It feels really good to know that part of the game, too.

SB: It seems to me that the Scandinavian region is producing some amazing music artists, like yourself, Quadron, Full Crate & Mar and so many others. What do you think it is about that part of Europe that is creating such an inspiring musical landscape?

MD: I don't even know. Maybe it's something about crossing cultural boarders or exploring an unfamiliar sound. For me it was just a taste thing. I've just liked this kind of music, and I wanted to be in a place where I felt like people would engage in it, that's why I moved to London. But yeah, Scandinavia is catching up. The world's first Scandinavian Soul festival is around the corner in September. I'm looking forward to perform there and listen to the other acts.

SB: You are launching a remix competition for your single "Something Like Nice" here at SoulBounce. What advice would you give to producers looking to enter?

MD: Emmavie (the producer) and I are just interested in hearing people's ideas! I often get emails of people wanting the stems of my songs to remix, so I thought let's give everyone a chance to play around with this song. All remixes will be uploaded to a SoundCloud when the submission period ends, and I'm really exciting to get introduced to some new producers. Send your remix and info about yourself to sln.remixit@gmail.com!

SB: What else is coming up next for Marie Dahlstrom?

MD: I'm performing in Paris on the 29th August at Le Bizz'Art, then Denmark and Amsterdam in September and then back to writing songs.

SB: I'm always intrigued about what artists are listening to, so what is on your iPod at the moment?

In conjunction with Marie Dahlstrom and Emmavie, SoulBounce is proud to present the remix competition for Marie's latest release, "Something Like Nice." Listen to the track below then head over to Bandcamp or here to download everything you need. Send your finished remixes directly to sln.remixit@gmail.com. This competition will be open for submissions until August 19th. After the August 19th submission deadline the entered tracks will be uploaded to SoundCloud and will be open to public vote for one week. The track with the most SoundCould "loves" will be the public winner. But the good news is that there will be two more winners -- one chosen by Marie Dahlstrom and one chosen by the producer Emmavie. The winning tracks will be featured right here on SoulBounce and will feature on Marie Dahlstrom and Emmavie's next EP! Good luck and happy remixing! 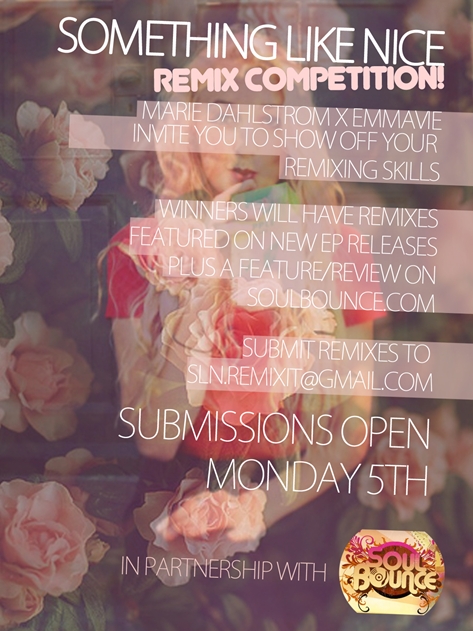