Solange, Questlove & Sampha Create Magic In The Studio On Her New Album 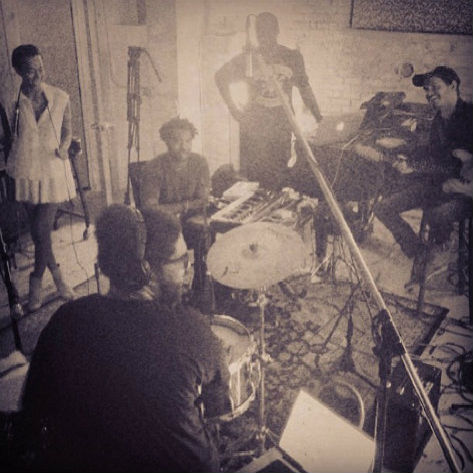 If you follow The Roots' drummer and New York Times best-selling author Questlove on social media, then you already know that its the best way to get the inside scoop on whatever he's working on. Monday night he used a grainy black and white photo to let his Instagram followers in on his latest collaboration -- with SB darling Solange Knowles. Explaining that he rarely appears in his own IG photos, he said the photo was one of the few times he allowed it, adding "day 3 of working on Solange's album & already the magic is killing me." Also appearing in the studio with the two are Sampha on "keys & thangs," Ray Angry on "keys & oh my god" and Dave Longstreth of the rock band Dirty Projectors on "guitar & cotdammy!!!" If Quest's colorful excitement is any indication, then we are in for a treat whenever this project drops. And ever the social media maestro, Quest also took his giddiness to Vine, posting a clip of Sampha tickling the ivories. Not that we needed Questo to tell us about how dope Sampha is though; the singer-songwriter-producer, who has been on our radar for quite some time, just released his debut solo EP Dual last month. But speaking of new music, we can't wait to hear what this batch of musical chefs cooks up with Solange.
Center