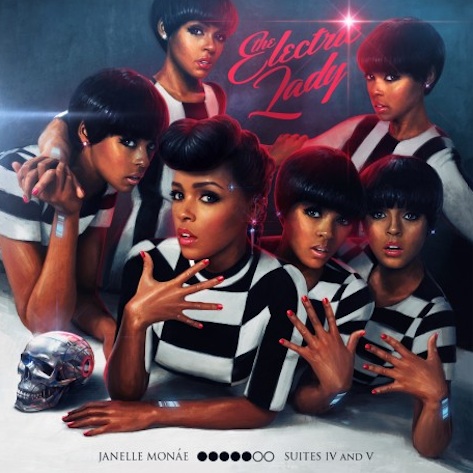 Last week the internet collectively jumped the gun when the artwork for the Target exclusive edition of Janelle Monáe's The Electric Lady hit these mean e-streets. Well today we have the reveal of The Electric Lady's official album cover, and it's even more exciting than we thought it could get as we see Janelle in character as everyone's favorite android Cindi Mayweather in the painting Cindi Mayweather And Her Sisters Cast A Spell Over the Good City of Metropolis by Samuel Spratt. Yes, that is quite a title and there's quite a story to accompany it that fans can read all about on Tumblr. The piece of creative fiction is quite entertaining as are the names of Cindi's five sisters -- Andromeda, Andy Pisces, Catalina, Morovia and Polly Whynot -- who all bear a striking resemblance to each other as "they" pay homage to The Jimi Hendrix Experience's banned 1968 Electric Ladyland cover. Also to be found on Tumblr is the lore behind the alternative album cover that features another Spratt piece entitled Concerning Cindi and the Glow of the Drogon's Eyes. It all lends itself to an engrossing and entertaining read and intrigues us all the more for the release of The Electric Lady on September 10th. For more, because we're sure that by now you can't get enough, watch as Sam Spratt sketches and illustrates The Electric Lady's official cover after the bounce and brings Janelle, um, Cindi and her sisters to life.
Center

16. Can't Live Without Your Love