Drake & Sampha Give ‘Late Night’ Just Enough With ‘Too Much’ 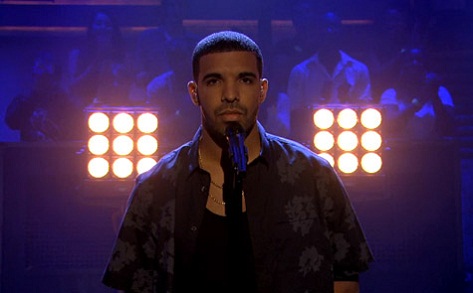 I wouldn't call myself a Drake fan (with most things Drake, I'm pretty much indifferent), but the rapper/wannabe singer seems to have perfected his formula a bit with his upcoming Nothing Was the Same. Outside of the Sampha-assisted "The Motion," one of my favorite tracks that I've heard from the set is the also Sampha-assisted "Too Much." On Friday night, Drake took to the stage of our favorite late-night programs Late Night with Jimmy Fallon to officially debut the track. With Sampha in tow, Drake took the stage with his serious face on and gave a personal message to his family and friends before Sampha started singing and playing the track's solemn opening. The introspective track definitely tugs on heartstrings as he talks about relationship struggles within his personal circle. Though "Started From the Bottom" definitely made it seem as if Nothing Was the Same would be more of the same hip-hop posturing, this performance was enough to pique my interest. Check out the clip after the bounce, and keep an eye out for the album when it drops next week.

TAGS:  drake, late night with jimmy fallon, Sampha, Scarlett Johanson
Previous: We ‘Love’ That MNEK Is Approaching His ‘Best’ Next: SoulBouncers: Win A Copy Of The ‘Boardwalk Empire Presents Sounds Of The Onyx’ CD!