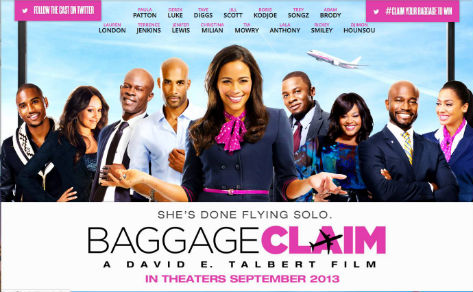 The season of the black ensemble film is upon us. Lee Daniel's The Butler kicked it off with a successful start that includes a three-week run at the top of the box office, and the upcoming The Best Man Holiday is sure to rack up big bucks near the holidays. Hoping to follow in those footsteps is David E. Talbert's latest romantic comedy Baggage Claim. The film, about a flight attendant looking for love among a cavalcade of (super duper fine) exes, stars Mrs. Robin Thicke herself, Paula Patton, who's become a black ensemble rom-com staple. It also boasts a cast that's a veritable who's who of Black Hollywood (Boris Kodjoe, R&B crooner Trey Songz, Taye Diggs, Tia Mowry-Hardrict, LaLa Anthony, Derek Luke and Christina Milian, plus a host of others, all appear). A recently released featurette, which includes interviews with director Talbert and a host of the cast and crew, makes the film seem like it will be a delightfully funny time at the cineplex. Making it even more delightful, though, is the inclusion of SB's favorite singer-turned-actress Jill Scott, who plays Gail, the best friend to Patton's Montana Moore. While we'll always be partial to Jill the Singer, we can't deny that the songstress has been killing it onscreen as well and this looks to be no exception. You can check out the featurette after the bounce and head to your nearest movie theater when Baggage Claim hits the big screen on September 27th.