Solange Does It For The ‘Lovers In The Parking Lot’ 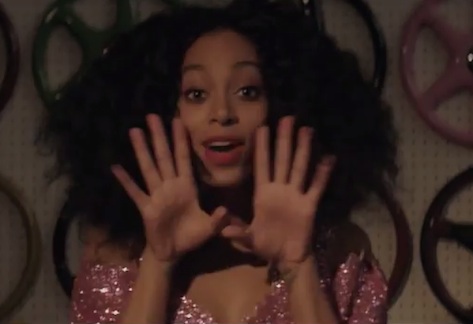 Even though Questlove hinted that Solange had already moved on to recording her next project, we here at SBHQ are happy to see that she's still working her last, the epic EP True. After announcing via Twitter last night that she'd be premiering the video for "Lovers in the Parking Lot" on BET's 106 & Park today, she went ahead and one-upped herself, premiering the clip on the homepage of The Creators Project, a partnership between Intel and VICE. Filmed at the Kings Flea Market in her Houston hometown, the video was conceptualized by the indie star who also shares directorial credits with Peter J. Brant and Emily Kai Bock. The dark and empty mall provides an eerie backdrop for the moody tune. Aside from brief appearances by Mannie Fresh, whose drums Solange sampled in the song, and Bun-B, who once worked at the mall, all eyes are on Solo as she dances, croons and whips her hair back and forth through the vacant cinderblock hallways. While we can't wait to feast our ears on whatever magic she made in the studio with Questlove, we are more than happy that she finally got around to releasing a second video from one of our favorite releases of 2012.