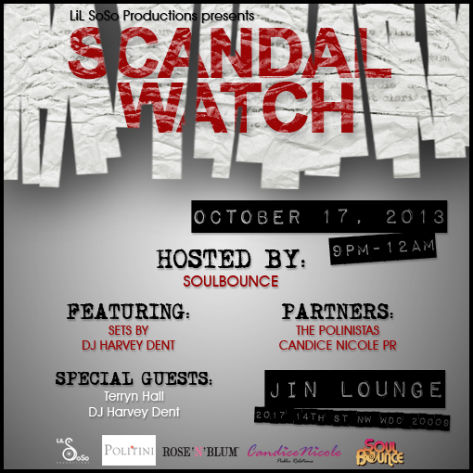 The third season of Scandal is off to a smashing start with enough twists and turns to have us clutching our pearls and hearts like Fred Sanford every week. If you live in the Washington, DC area and want to come out to fellowship with fellow Scandal watchers and have some fun in the process, then you'll want to make your way to this week's Scandal Watch DC watch party series hosted by yours truly. That's right, SoulBounce is in the driver's seat this week to discuss the music that we've heard thus far on season three and that awesometastic a SCANDALOUS mixtape mixed by dj harvey dent, who will also be one of our special guests along with Editor-in-Chief of DopeReads.com and SoulBounce Contributing Editor Terryn Hall. In addition to chatting it up with us, dj harvey dent will also be the designated DJ for the evening moving the crowd. DMV Bouncers really don't want to miss this week's #ScandalWatchDC because SoulBounce will be giving away a pair of tickets courtesy of Briclyn Entertainment to see Eric Roberson at the Howard Theatre live on the spot. It all goes down at Jin located at 2017 14th Street, NW in Washington, DC starting at 9 pm on Thursday, October 17th. RSVP now for free entry on Eventbrite. See you there, and you can see me cutting up in a promo video right here.