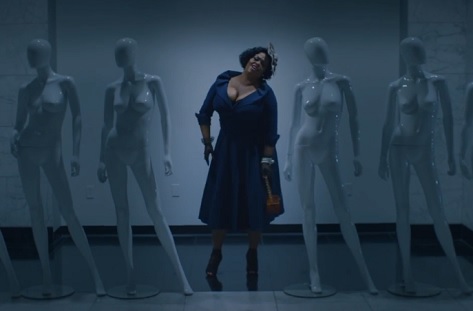 Robert Glasper Experiment and Jill Scott's "Calls" was the first taste that we got from the upcoming Black Radio 2, so it's fittingly the first visual filmed for the set as well. Opening with the anonymous quote "Moving forward is moving on," we find Jilly from Philly dressed like she stepped out of the '50s (and literally stepping out of a 1950s car) stuck at a red light at the crossroads of San Fernando and Elk. As the video progresses, however, we learn that she and the car are an anachronism in a modern world. Jill seems to be searching for someone, eventually wondering around a mall until she finds none other than Robert Glasper. After a few a tics, Jill and Robert are back at the crossroads and, with the help of a magical button, moving past the red light and on down the road. While interesting and visually arresting, the meaning of the clip could be left up to interpretation. Are Robert and Jill ghosts of the past who haven't been able to move on? Do they represent a throwback to musical ideals lost in modern society? I guess that's all up to the viewer. Hop after the bounce now to see what you come away with.