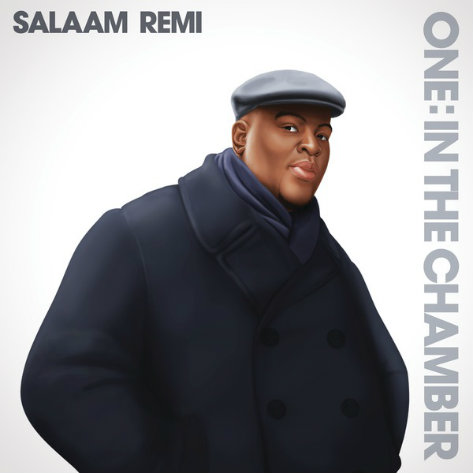 SaLaAM ReMi's career has undergone several incarnations over its 20-plus year duration. There's SaLaAM the hip-hop producer, responsible for such hits as the Fugees' "Fu-Gee-La" and Nas' "Made You Look." Then there's SaLaAM , the soul music mastermind behind standouts such as Jazmine Sullivan's "Bust Your Windows," Alicia Keys' "Girl On Fire" and more importantly Amy Winehouse's Frank and Back to Black albums. There's also SaLaAM the film scorer behind the Sparkle reboot, executive music producer on the two Sex and the City movies and more recently, SaLaAM the EVP of A&R at Sony Music. Now finally, after what seems like an eternity, music listeners get to know SaLaAM ReMi the solo artist with the release of his debut full-length album, ONE: In the Chamber. Released under his Flying Buddha sub-imprint (which along with his other sub-imprint, RemiFa, falls under his Louder Than Life imprint), the album provides a sweeping playground for the multifaceted musician to showcase the girth of his musical abilities.

He kicks things off with the album's title cut, "One in the Chamber" featuring Akon. While the beat is trademark ReMi, the problem with this song, as we pointed out before, is Akon, whose nasally Auto-Tuned vocals do little to enhance an otherwise solid track. Despite such a puzzling start, the album's remaining 11 tracks more than make up for it. For his first solo outing, he enlists the talents of more vocally adept artists such as Jordin Sparks, Ne-Yo, CJ Hilton, Estelle and Stephen Marley.

Several classic songs get reimagined as contemporary works, most notably The Beatles' 1966 song "Eleanor Rigby." Here, Sir Paul McCartney's vocals are instead performed by Marley. ReMi stays true to the original's sparse string arrangement until about a minute in, when he infuses slight flourishes of reggae that provide the perfect backdrop to Marley's understated performance. Meanwhile, Keni Burke's 1982 hit "Risin' to the Top" also gets the rework treatment, this time with the heavily sampled original being transformed into an instrumental that still packs in just as much of a groove as Burke's version. Just as in many other songs throughout the album, ReMi uses orchestral arrangements to add a richness and depth to this long overdue solo effort.

Other album standouts arrive via talents from across the pond as ReMi, who has regularly collaborated with British artists over the course of his storied career, calls on several of them once more. "Makin' It Hard for Me," his duet with Corinne Bailey Rae which we told you about last month, still remains one of the strongest offerings on the album, with her signature cooing nestling itself nicely into the song's throwback vibe. Another highlight comes by way of British singer Lemar on "More Than Music." Lemar's slightly raspy voice sounds both contemporary and classic in this mid-tempo number. Estelle also lends a hand on the fun and raucous "Cup of Tea," which finds her redefining "friends with benefits." Her voice sounds as good as ever here, though I couldn't help but wonder about how the late Amy Winehouse would have delivered this with an extra dose of sass. Liam Bailey, who sounds like a cross between John Legend and Marley, rounds out the pack of British collaborators to lend his talents to ONE: In the Chamber on "I Belong."

One aspect surprisingly omitted from the album is hip hop. While influences can be heard here and there throughout, the only artists featured on the album are singers. Though certainly not a deal breaker, for a man who has partnered with Nas more times than I can count and who just released actor-turnt-rapper Mack Wilds' debut album, the absence of any rap is quite noticeable. Even still, he crafts a solid solo outing that manages to cover all the bases of what he's capable of. Hopefully this won't be the last time he steps out on his own.

SaLaAM ReMi One: In the Chamber [Amazon][iTunes][Google Play]