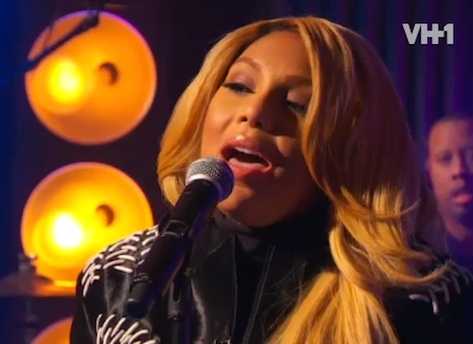 Reality TV star, singer and new mom Tamar Braxton stopped by VH1's Big Morning Buzz Live yesterday morning to give her Tamartians an acoustic version of "The One." For the performance of the Love and War single, Tamar put on a soft, sultry voice to sing a stripped-down version of the song. She gave the audience just enough, only belting out a few words sparingly. Was this an effort to take it easy considering her latest vocal issues? She is currently on tour with John Legend after all, so by all means Tamar needs to salvage what she can. There were some moments, however, where her soft ad libs didn't quite work, but the band was there to keep the song sweet and soulful. Won't he do it? After her performance, she sat down to talk about her four-month-old Logan and his love for ratchet television shows like Maury and Judge Judy. God bless the child. You can catch Tamar -- hopefully in better voice than this -- on John Legend's Made to Love Tour, which heads down south to Georgia and Florida.

TAGS:  john legend, tamar braxton
Previous: Justin Timberlake Gets Dragged To His Demise In ‘TKO’ Next: Robert Glasper Experiment Are On Another Frequency With ‘Black Radio 2’