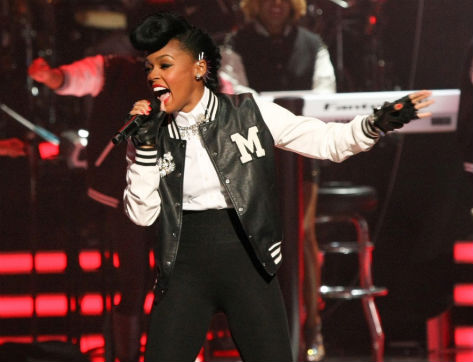 The annual Black Girls Rock! telecast on BET is always a highlight on the cable network that has been consistently stepping its game up of late. The crown jewel of their multiple awards shows is Beverly Bond's brainchild, which was recorded last weekend at the New Jersey Performing Arts Center in Newark and telecast last night. Kicking off the festivities this year was previous honoree Janelle Monáe who entertained the audience with a rip-roaring performance of "Electric Lady." Setting the stage for Janelle were the "Electro Phi Beta" sorority sisters who started the show with a step routine that was precise and on point. All clad in matching black-and-white letterman jackets, they stomped the yard and prepped everyone for Big Sister Cindi Mayweather's entrance. Janelle was ready to rock and launched into her new single with her usual verve. She didn't miss a step or note as she got the crowd up out their seats to sing and groove along with the catchy tune, which had extra special meaning on this night of honoring Black girls of all ages. After watching her in action you'll probably want to pledge Electro Phi Beta.