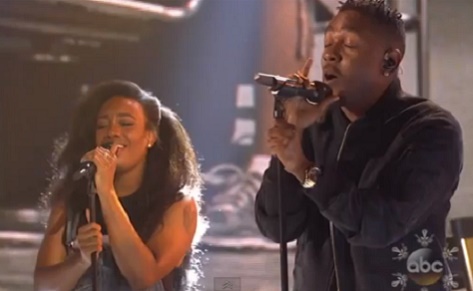 With Rihanna winning the American Music Awards' first ever Icon Award last night, you couldn't really take much of what occurred during the show too seriously. Among the extravagant and at times bizarre showings, Kendrick Lamar's simple performance of "Swimming Pools" and "Poetic Justice" easily got lost in the sauce. And it would be easy to see why. Instead of going all out like other acts, Kendrick decided to pare things down, performing the tracks with just a mic, his band and recent TDE signee SZA, King Kendrick clumsily mashed together the two hits from his good kid, m.A.A.d city while allowing SZA a bit of shine as she sang the hooks. Though the camera panned to many pop tarts rocking off beat to the tracks, the performance lacked a certain energy that the good kid has brought to other television showings with similar resources. Still, at least Kendrick was on hand to represent hip hop at a music awards show that was severely lacking.