Lady Gaga & R. Kelly ‘Do What’ They ‘Want’ On ‘Saturday Night Live’ 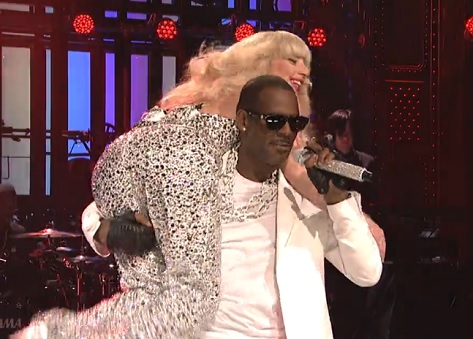 Are you ready for your weekly dose of WTF? This week's edition is brought to you by none other than pop's bastion of trying too hard Lady Gaga. Gaga took the stage this weekend as the host and performer on Saturday Night Live. She actually proved to be a pretty good host of the show, poking fun at pop culture and herself many times over as the show wore on. However, the weirdest sketch of the night wasn't a sketch at all, it was her performance of Artpop single "Do What U Want" with duet partner R. Kelly. Dressed like she was ready for a night out at Studio 54 with the flowiest platinum blonde hair money could buy (apparently the Aguilerian™ technique extends to performance wardrobe), Gaga kicked off the set with some of the stiffest, most awkward dance moves I've ever seen (Gaga moved like a mixture of modern-day, post hip surgery Liza Minnelli and this guy). However, the awkward ante was upped when Kellz appeared on stage to sing his part of the duet by grabbing Gaga and throwing her over his shoulder. As if that weren't enough, the twosome then uncomfortably simulated sex with R. doing push-ups over the pop star and then Gaga wrapping her legs around his torso as she wailed like a cat in heat. Awkward as it all was, though, it was still nothing short of entertaining. If you want to see the performance (and join in the debate on whether or not R. was wearing a skirt) peep the duo's performance of "Do What U Want" after the bounce.