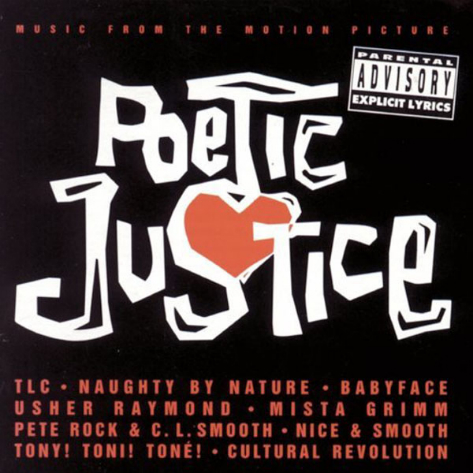 Poetic Justice is not just a refrain from a Kendrick Lamar song, it's also the title of a landmark 1993 film starring Janet Jackson and its accompanying soundtrack. The film and soundtrack arrived in the '90s, which were flush with great movie soundtrack albums that defined the black experience during the time. Soundtracks for films like Juice, New Jack City, Love Jones, Soul Food, Boomerang and others allowed a variety of new and established musicians to add to the ethos of the film and spawned records that could hold their own outside of the confines of the film. A blend between hip-hop, R&B and New Jack Swing that separates itself from the rest of the pack, the soundtrack to Poetic Justice served as a snapshot of where urban music was in 1993.

Coming off of the success of Ooooooohh... On The TLC Tip, TLC opened up with a playful cover of The Time's "Get It Up." Though the original was released in the '80s, TLC's take on the funky track brings you back to a '90s basement party or a skating rink where TLC's brand of R&B and T-Boz's rasp were mainstays. Mista Grimm's "Indo Smoke," a spaced out gangsta rap track, featuring Warren G and Nate Dogg, sounded like the progeny of a George Clinton and Parliament-Funkadelic jam session. Currently, a song like "Indo Smoke" does not seem like it would be taken seriously, but it actually peaked at #56 on the Billboard charts.

Babyface
crooned his way on the album with "Well Alright," a typical LaFace record. While its tolerable, it does come across like a track that didn't make it on his 1991 album, Lovers. Pete Rock and CL Smooth brought a Native Tongues feeling to the album with the jazz-infused "One In A Million." In my opinion, this song provided the heartbeat for the album, as it was an instant identifying mark of the early '90s sound.

"Call Me A Mack" represented Usher's first appearance on a major record. Even at a tender age, you can hear how much control Usher had over his voice. Usher, who is still relevant today (when he wants to be), sharing the same bill as 2Pac, Babyface, Naughty by Nature  shows the depth and breadth of R&B at this period. The most interesting inclusion on the album comes in the form of Stevie Wonder's "Never Dreamed You'd Leave In Summer," which was featured during one of the movie's more emotional scenes. A track originally from Stevie's Where I'm Coming From album from 1970, its inclusion at the end of the album adds a classic feel to the record.

Other contributors to the set read like a who's who of 1990s R&B and hip hop. Tony! Toni! Toné ("Waiting For You"), Terri & Monica ("I've Been Waiting"), Chaka Demus & Pliers ("I Wanna Be Your Man") and Nice & Smooth ("Cash In The Hand") all made contributions. As well, jazz legend and composer Stanley Clarke contributed "Justice's Groove," which was used throughout the film. Poetic Justice marked the second time that the movie's director John Singleton and Clarke had worked together (Clarke also did the score for 1991's Boyz n The Hood).

Although not included on the American version of the soundtrack, Janet Jackson's "Again" is probably the best know song featured in the movie. It was nominated for a Golden Globe and Academy Award for Best Original Song in connection with the film. Janet followed up this feat by singing the song live (with the flu) at that year's Academy Awards ceremony.

As we see now, hip-hop and R&B are shadows of each other and blend together in a way that some may argue diminishes the impact of either one. Poetic Justice almost feels like it is torn between hip hop and R&B, with both genres struggling to stay pure. It is a look back at urban music at a turning point. The combination of hip hop, R&B and New Jack Swing didn't make the record sound cohesive, but it did make it sound interesting.