When RC, The Gritz & Erykah Badu Say ‘Leave Me Alone’ You Better Listen 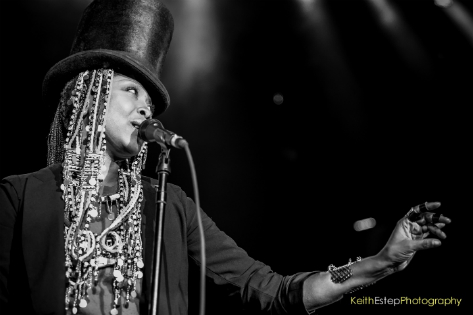 No, really. Stop whatever you are doing right now and do as the title to this says and listen to "Leave Me Alone" from RC & The Gritz featuring Erykah Badu immediately. This new Badu track snuck up on us like a ninja today and can be found on the newly released debut album Pay Your Tab by RC Williams and his band The Gritz. If RC's name isn't familiar to those outside of Dallas, Texas where he calls home, it should be noted that he is Badu's current musical director and also a part of the live musical collective The Cannabinoids who perform on occasion with the singer. As a matter of fact, the best Badu show I've ever attended was her concert with The Cannabinoids in Baltimore at Rams Head Live! in December 2011. Yes, the show was so good that I committed the date to memory and have been waiting for the collective to make a return engagement. Until that happens I'll be moving and grooving to "Leave Me Alone," which finds Badu lamenting about the trappings of fame and how sometimes she just wants to be left the hell alone when she's out in the streets. Gone on and press play and you might just find your new favorite Badu song courtesy of RC & The Gritz. [Photo: Keith Estep]


TAGS:  audio, erykah badu, RC & The Gritz, RC Williams, The Cannabinoids, The Gritz
Previous: J. Holiday Gets Sexy In ‘After We’ Next: Tune Into Centric’s ‘Soul Sessions’ On Thanksgiving Day For SoulBounce’s Music Video Playlist