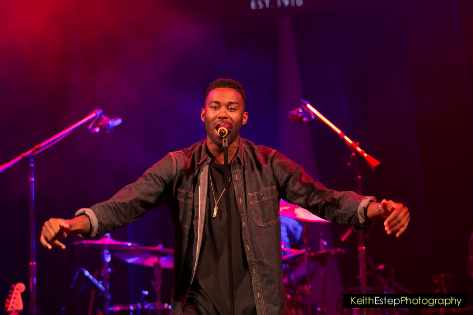 Moving across the stage with a permanent smile on his face, Aaron Camper was in his zone. Always buzzing with energy whether solo or on tour with various artists, Camper's force always fills the room. We caught up with the singer/songwriter earlier this fall when he made a stop in Washington, DC to perform at Briclyn Entertainment's Project Hygiene show at The Howard Theatre. He sang his heart out to teens in the audience, going from Prince's "1999" to John Mayer's "Waiting On the World To Change." He also performed his own music, with new songs "Breaking My Heart" and "Myra" as crowd pleasers. Since then he released the video to "Breaking My Heart," where he croons to his ex that she's basically a non-factor. We sat down with Camper to chat about his performance, his journey to becoming a solo act and what's next on his agenda.
Center

SoulBounce: You started your career right out of high school. How was it being in the industry at such a young age?

Aaron Camper: I wasn't immediately in the industry, I started out singing gospel.

SB: Because your dad was a preacher. Is he still a preacher?

AC: Yes, absolutely. So I didn't start out immediately in the industry. I sang gospel for two years with a group and from there I took another step and decided to just go into it. So I've been doing it for like three or four years industry-wise if that's what you want to call it.

SB: And then you performed with Tye Tribbett?

AC: Yup, that's who I started with right out of high school.

SB: So was that an easy transition since you were already doing gospel?

AC: The way it happened was just destiny. They would come down to the lower parts of Maryland, where I'm from, to have concerts and they would do the homecomings. So we kinda got cool that way. We had a group back then so we used to open for them. It was just one of those situations where we just linked up and then he was like "Come to Jersey" and I was like "I'm with it!" and just left. And I've been gone ever since I think.

SB: So you did gospel and in 2008 you got your first GRAMMY nomination for your work on Marvin Sapp's album Thirsty. How did that feel?

AC: It was amazing. That was the first time for that, and it was a good time to just experience it at a younger age. It was just another stepping-stone.

SB: Did you feel like it was normal to be nominated for a GRAMMY so young, because it's not!

AC: I never pay attention to stuff so it happened and I was like, that was probably the only thing that made me stop and I was like "Oh, that's dope." And then I was like "Okay, what's next?" And my parents were proud and they had something to hang up other than a basketball trophy so that was fun, and then when it happened it made me hungry to do more.

SB: Were your parents always supportive of your singing?

SB: So how did you end up working with all these other artists like Chris Brown and Jill Scott?

AC: Right place, right time, opportunity and always being prepared. I just started getting calls, and I don't say no to anything.

SB: And they were looking for background singers?

AC: It came in different ways per the artist. I hooked up with Jill before I even started working with Tye. It was the people like Steve McKie, Lil Darryl, and the list goes on -- Omar Edwards, James Poyser, Adam Blackstone, The Roots, Eric Roberson along with Tye. It was people that allowed me to grow in that scene in Philly at that age, that's something I'll never forget. So there was a bunch of people that took me in, a kid from Maryland, and they just let me figure it out. Dana Sorey, who also played a big part in me being whatever I am now, showed me how to record myself, told me how to invest in myself, buy some equipment and I never turned back.

SB: And so how was that experience, what did you learn from traveling with people like Jill Scott?

AC: She told me something one time that will never leave me. She said "everybody can sing but everybody's not honest." So that really struck a chord with me looking around like everybody's got a record out, everybody's an artist, that's kind of what kept me held back from doing anything. Everybody can sing, people can sing circles around me, you know what I mean? I know people who can sing circles around me, but they can't sing the song I'm singing and if it's honest people don't have a choice but to connect to it emotionally. If it's honest, people listening don't have a choice but to connect with it and feel it. So if your song connects, that's a good song, not necessarily because of how good it sounds or how eloquent or whatever. That's one thing I learned from her. Being on the road with Diddy, I learned how to grind and go get it by yourself and for yourself and to go out after shows and hand out flyers, play the acoustic outside before you go on stage with whomever. When I was with Mike Posner I was out in the parking lot on my guitar, handing out flyers, then go on stage and sing background. Just with different people I learned different things, it was all a learning curve and I just observed and sponged everything up around me.

SB: And how about your experience with Justin Timberlake? You guys just look like you're having a bunch of fun on stage.

AC: It's refreshing, we play real music but at its highest level. I don't know, it's just different to play with artists like that and to be surrounded by a bunch of world-class musicians, you know players and singers, it's just bar none and it's the most amazing thing I've experienced. We just have a lot of fun.

SB: You launched your solo career in 2011, what made you want to do that?

AC: Why not? My partner Adam Blackstone and I were writing a lot of songs for different R&B artists and we would get it back and it wouldn't have the same conviction that I had when we sent it to them, where it just sounded like they just sang this. So it was just like why not man, let's just put out something. If it doesn't do well, at least we can say we did it and it didn't work and we suck. But you know thank God, 40,000 downloads later off the mixtape and here I am. We just took a stab in the dark and said let's just do it ourselves.

SB: So speaking of the mixtapes, what's changed from Welcome to My World to the new album Madness X Megahurtz?

AC: It's actually Welcome to My World on steroids. It's the same content, still got questions about love and relationships and just being on the road all the time when you want to be home. I love kids and I don't have any yet, so those frustrations and enjoying myself, and living. It's just a lot, and that's what I'm writing about. I'd be lying if I said I had a Bentley and other stuff you want to hear.

SB: So speaking of Adam Blackstone, you two collaborate a lot. How did that relationship come about?

AC: I met him in 2005. He was actually the music director for Mary Mary at the time and we met at a Tye concert. I'd heard of him and he heard I was the kid that sings so we just linked on the sidekicks and then we just went to work and we're still working. That's my man, held me down from day one, believed in me when I didn't believe in myself and nobody else probably did either.

SB: So what songs have you guys done for artists?

AC: Honor Society, the last album they did, we put songs down for that. The Queen Latifah Show theme song that's out, we did that together.

SB: How did that come about?

AC: Queen Latifah has actually always been a supporter and a good friend to Adam and I. I actually met her through Adam. You know she didn't know I was an artist, she came to one of my shows and you know that's just my homie and she definitely just looked out for us on the theme. The network had like three other artists they could've used and they picked it. You know that's just a blessing, you can't control that; you can't make that happen yourself. So just a great relationship and that's God, so that's how that all happened.

SB: You seem to have a pretty great fan base, when you tour what are your fan interactions like?

AC: Really? I didn't know. Normally people don't know me. Cause I'm on stage with artists that eclipse me 20 times over so no one knows me. So I don't get into that. But if someone shows me love of course I'm going to show them love, why not? I do have a loyal core, the Camp Troopers. They are loyal, and they hold me down.

SB:
Camp Troopers? That's what's up, like Rihanna has her Navy and Nicki Minaj has her Barbies, you have your Camp Troopers.

AC: Yup, the Campers. It's working whatever they're doing.

SB: So what's next for you, we know you have your new album coming out?

AC: It's just really to put out all of my music. You can hear the mixtape, you can hear my album but there are so many different dimensions to me, and you only get to see that live. I go into anything out of my songs, I'll go into Curtis Mayfield, I play P-Funk for like 20 minutes, I'll play Prince for like 15 minutes, you know what I'm saying.

SB: You grew up around a lot of music it seems.

AC: I definitely did, my dad had Marvin Gaye going and Al Green, The Winans, Commissioned, everything. My mom had Roberta Flack going. My sister had New Edition, Bobby Brown and Boyz II Men. My brother had D'Angelo, Erykah Badu and Wu-Tang. My house was like a music library. You go in anyone's rooms and they got that thing going. And me, I turned on the radio one day and I heard Phil Collins, I heard Hall & Oates, I heard Steely Dan one day and I was like "Oh my God, who is this?!" You know, and that just took off everything else I listen to.

SB: So what makes your soul bounce, Aaron Camper?