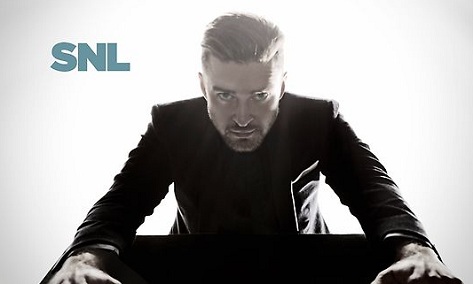 If hindsight truly is 20/20 (see what I did there?), then 2013 will go down as the year that we overhyped Justin Timberlake. While part one of The 20/20 Experience was admittedly fairly decent (that's the biggest compliment I'm giving, folks), it didn't necessitate an unnecessary slog through the sloppy seconds that was The 20/20 Experience Part 2 of 2. Still, pop culture wants to keep making Justin's comeback a thing, so of course he was invited back to the Saturday Night Live stage for the second time this year as the musical guest (and unofficial second host) for the Jimmy Fallon-hosted last episode of the year. With the star power on 10 -- Madonna and Sir Paul McCartney and outgoing NYC mayor Michael Bloomberg were also on hand -- Justin's performances came off a bit dull. First up was a laser light show for "Only When I Walk Away," which would've been cutting edge if this were 1982. He redeemed himself a bit, though, with his stripped down performance of "Pair of Wings." Sitting front-and-center with his acoustic guitar and backing band and string section, it was almost apparent what some folks see in the crooner. Almost. But, I'm a hater and I'm sure if you're a JT fan, you'll be all over these performances, which you can watch til your heart's content right here.
Center