K. Michelle Talks Touring, Being A Rebel With A Cause & Her New Reality Show 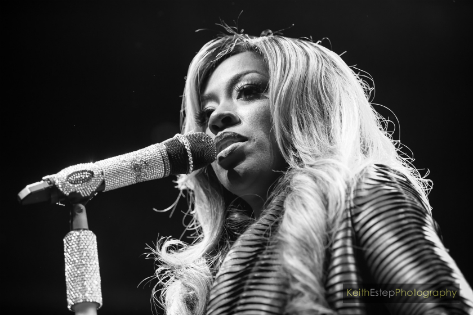 Currently on her Rebellious Soul Tour presented by BET's Music Matters, K. Michelle is on top of her game. She's on a popular reality TV series, where she successfully transitioned from Atlanta to New York City, her acclaimed album made a stunning number one debut atop Billboard's Top R&B/Hip-Hop Albums and she's launched a national campaign that's gained momentum on social media. Even after releasing a two-song Christmas bundle, K. Michelle found time to make another mixtape and follow-up to its predecessor 0 F**ks Given, Still No F**ks Given will be released on January 8, 2014. After an exceptional performance at The Fillmore Silver Spring, where she talked about past relationships and the crowd's ratchetness, we caught up with the singer to see what she was up to. Fresh off of her Soul Train Best New Artist win, K. Michelle sat down with us to talk life on the road, her "Rebel Against" campaign and what she's got planned for 2014.
Center

SoulBounce: So you just performed for The Fillmore Silver Spring audience, how did you feel?

K. Michelle: I always have a good time on stage; it's a whole lot of fun, it's like home.

SB: Nice, what are your favorite songs to perform off of Rebellious Soul?

SB: Is there any song that's really hard to perform for you?

KM: You know when I first started to perform some of them were. But now I'm used to it, and the crowd's really supportive and they sing with me so they're all cool.

SB: You're doing your Rebellious Soul Tour, what would you say is your favorite thing about touring?

SB: And how do you stay creative when you're on the road?

KM: That gives you a lot of energy and wanting to be very creative, like it's a lot of songs that I need to write and a lot of things I've seen that I need to put into my new album.

KM: I have some ideas. I haven't started it completely, but I'm in a completely different place than in my first album. The first album was a lot to say from years, and now I'm just somewhere else so there's other things that need to be said. And you know, it's not just about heartbreak, it's just about life issues. 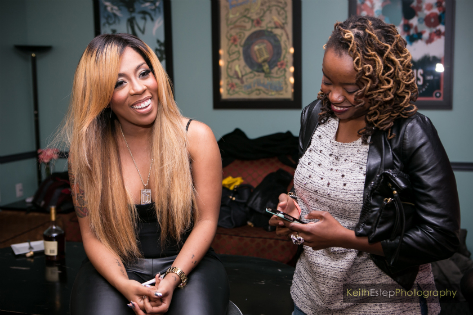 SB: Speaking of being in a different place, think about when you started to now where you've been on a reality show and you have number ones. What would you go back to tell yourself?

KM: Just be patient and things are gonna happen when they're supposed to. Just chill out and be patient.

SB: Nice! We've waited patiently for Christmas and you just released your two-song Christmas bundle on iTunes, what made you pick "Christmas Night" and "Oh Come All Ye Faithful"?

KM: I just did "Christmas Night" because everybody goes through things, and it doesn't stop because the holidays are around. A lot of people get even more depressed around the holidays so "Christmas Night" was just a song of heartbreak and Christmastime, which a lot of people go through. And I've always loved "Oh Come All Ye Faithful" so those two songs were easy for me because they came natural.

SB: And since it's the holiday season, what will you be up to this Thanksgiving and Christmas?

KM: I'll be on the road this Thanksgiving, this is my third year working on Thanksgiving so I really don't do a lot, but Christmas is really important to me because of my son, so it's always a big Christmas!

SB: That's dope. So let's talk about being rebellious, I love how you released Rebellious Soul alongside an actual cause because you have the "Rebel Against" campaign. What kind of impact has that had?

KM: Oh, it's been very impactful. It's basically everyday we were getting these letters and we're still getting them, and people are just expressing their particular obstacle that they have to overcome. And you know if you read some of the comments -- you always have ignorant comments -- but you have a lot of people offering support towards these individuals who are open enough to share what they're going through. So it's a really big campaign, and I plan on continuing it.

SB: And I see that the campaign is primarily on social media, and you use social media a lot. I follow you on Instagram, and it looks like you have a lot of fun. How has social media helped your career?

KM: It's helped and hurt my career a lot because I've been very transparent on social media, and I haven't protected and saved a lot of my personal life. But at the same time it's also allowed fans to be closer to me so there's negatives and positives to it.

SB: Back to music, what artists are you checking for these days? Who are you listening to?

SB: I can see y'all together! So what's next for you? I know on stage you mentioned your upcoming reality show No New Friends coming up on VH1, tell us more about that.

KM: It's gonna come out 2014, we really get into filming in January. That'll be out for you guys to kinda see what it's like to work on the second album. I have my first business opening for my birthday. I'm doing a hair gallery and salon opening in New York.

KM: [laughs] Yeah, if that's what you want. [laughs] That's opening for my birthday and just a lot of things that I have in the works, that's what the show's about. And my second single, people kinda forgot that I'm only on my first single, so the second single comes out in January.

KM: "Can't Raise A Man" is the second single, so I have a lot of work to do with that record. So still in the album, about to start the second album and the TV show.

SB: And last question, since the website is SoulBounce.com, what makes your soul bounce? 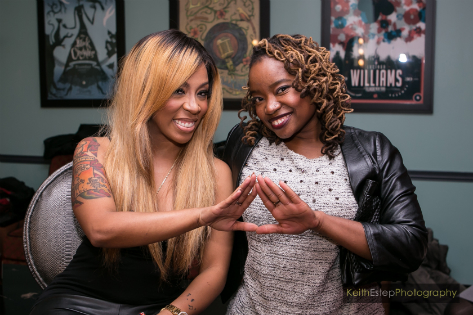