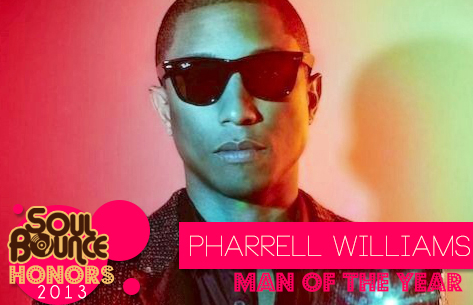 This year was a milestone year for Mr. Pharrell Williams. For one, the forever young music man celebrated his 40th birthday in April and tied the knot with his longtime girlfriend, and mother of his son Rocket, Helen Lasichahn. Those two things would be more than enough for anyone, but they don't even tell the half of what else he's done with his 2013. Casting his irons among several different musical fires, Pharrell was almost a one man musical force. Considering he has left such an indelible mark on music this year, we'd be amiss if we didn't acknowledge all the work he's put in by naming him SoulBounce's Man of the Year.

Let's get the top shelf items out of the way first, shall we? The praises of "Blurred Lines" and "Get Lucky" have been sung most of the year as the two songs moved into the upper echelon of the Billboard charts and made a home there. Robin Thicke's "Blurred Lines" channeled the vibe of Marvin Gaye's "Got to Give It Up" perfectly (maybe a little too perfectly if you believe Marvin's family), a groove that was only made better by Pharrell's one-liner ad-libs and howls. "Get Lucky" also evoked an era, this time the disco funk of the '70s, as he, Daft Punk and Nile Rodgers concocted a jam all about, well, getting lucky. In a year where people just wanted to have fun, these two songs were not only the right songs at the perfect time, but a testament to Pharrell's ear and his ability to predict what folks will want to hear next.

Just those two songs alone would've been enough to put in high consideration for our Man of the Year title. But Pharrell wasn't content with just crafting the two biggest songs of the year. His talents ran the gamut of styles and genres. He channeled the inner post disco divas of both Jennifer Hudson ("I Can't Describe") and Beyoncé ("Blow"), added his own spin on yacht rock for Mayer Hawthorne ("Reach Out Richard"), went back to his hip-hop roots for Nelly ("Get Like Me") and channeled '80s dance-pop for his artist Leah LaBelle ("Lolita"). Basically, he proved to be a versatile every man not afraid to hop between genres.

Then there was "Happy." Lifted from the Despicable Me 2 soundtrack, it could've easily been dismissed as simply child's play. But Pharrell infused the single with '60s style instrumentation, hand claps and a call and response breakdown that transcended beyond the generation gaps like just plain old good music should. The infectious joy expressed by the track couldn't be contained and spread like wildfire upon its release. It also spurred further innovation from the musical maestro. He put together the world's first-ever 24-hour music video, with many people (including famous friends like LaBelle, Jamie Foxx, Magic Johnson, Odd Future and more) singing along to the track every hour of the day.

In a year full of musical giants, Pharrell has still managed to find himself at the top of pile. Yet the end of 2013 proved that Pharrell has even more in store. He's been tapped to compose the score for next summer's The Amazing Spider-Man 2. And during the annual GRAMMY nomination announcements, he was nominated seven times. While most of those nominations concerned "Blurred Lines" and "Get Lucky," he was also nominated on his own as Producer of the Year. To top it all off, he's announced that he's inked a deal with Columbia Records and will be releasing his newest solo album sometime in the new year. With his 2014 already looking so promising, don't be surprised if Pharrell snags this honor once again.