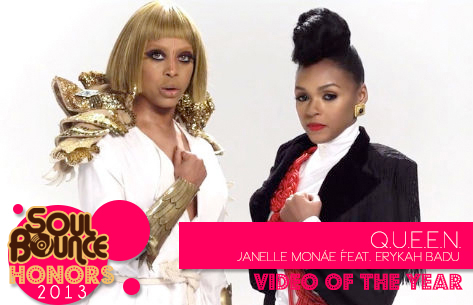 We fully admit to the fact that when it first surfaced, we were not as enamored with Janelle Monáe and Erykah Badu's "Q.U.E.E.N." as we expected to be, given that it was a collaboration between two of soul music's most forward-thinking stars as well as SoulBounce faves. However, once the Alan Ferguson-directed video dropped, everything changed.
Center
After the bounce

Janelle Monáe is well known for her theatrical flair, as anyone who has seen her live show or heard her epic albums can testify, so we were not surprised when the video's intro kicked in, with a voiceover announcing we were to be taken on a tour of a living museum showcasing members of Monáe's "rebellious" Wondaland Arts Society. It's during the intro that we get our first, brief glimpses of Badoula Oblongata looking mighty fierce with an ash blonde afro and whip in hand and a stunning model-like Monáe dressed in her trademark black/white combo.

As the intro ends and the song's funk-fueled guitar kicks in, the various members of Wondaland are brought to life, including a bevy of black and white clad backing singers/dancers, who we later learned were Cindi Mayweather's Android sisters. Janelle busts out the moves -- including some tasteful twerking -- and grooves that have led to comparisons with the likes of James Brown. The black-and-white theme flows through the entire video, which as well as being aesthetically pleasing, subtly reinforces Janelle's brand, that of a monochrome cyborg who's mission is to rescue (soul) music from the clutches of conformity.

Badu's guest appearance, as she walks a poodle and sings the refrain "the booty don't lie" is all too brief but nonetheless striking. Janelle Monáe is the main attraction at this museum and the video is the perfect showcase of her unique vision and rock-solid artistry.