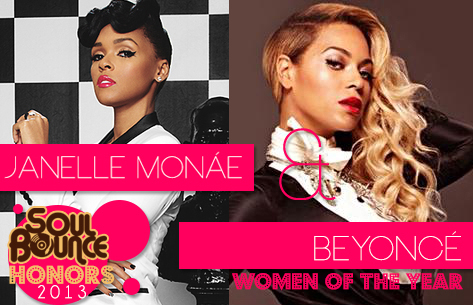 2013 was a great year for women in music. Not only were they ruling over the charts and racking in record sales, this year saw more than a few acts have sensational debuts, make big comebacks, break chart records and even take control behind the scenes. You can see why, then, that when it came to naming SoulBounce's Woman of the Year there was a rather heated debate. Once the smoked cleared, papers had been thrown, obscenities had been yelled, tables had been flipped and feelings were most definitely hurt, it became clear that this year belonged to two women. One continued letting her freak flag fly as her futuristic narrative took her higher than before. The other reinvented herself and in the process may have changed the way the music industry works entirely. Though both took wildly different approaches, they arrived at the same conclusion: their names on everyone's lips. Loyal subjects, bow before your queens Janelle Monáe and Beyoncé.

Janelle Monáe could do no wrong in our eyes this year. While rumors of her second coming had made the rounds months before, she made the first step of her return by releasing the funky, booty-shaking groove "Q.U.E.E.N." in April. The first single from The Electric Lady brought soulstress Erykah Badu along for the ride as the pompadour-sporting songstress crafted an anthem for not only the fierce black sistas but everyone who didn't fit into society's strict social norms. She rode the track into the warm days of summer before dropping the surf rock-inspired "Dance Apocalyptic." But she wasn't done there, as "Primetime," her purple-hued slow jam duet with Miguel, revealed a much more sensual side to the cyber love that Janelle had previously shown.

But even with three singles already released, we weren't prepared for what the September release of The Electric Lady would bring. What Janelle had created was yet another sweeping opus that was at once an amalgamation of her influences and a progression of her sound. In effect, the singles had somewhat bamboozled us. Playing more like a futuristic radio station than the cohesive rock opera of The ArchAndroid, The Electric Lady found Ms. Monáe flipping styles with ease as she gave us everything we wanted ("Can't Live Without Your Love," "It's Code," "Look Into My Eyes") and a few things we don't even know we could have ("Ghetto Woman," "Dorothy Dandridge Eyes," "What An Experience"). She also showed how well she can play with others as the set boasted appearances by Solange, Miguel, Badu and Prince (!!!). But this show was all hers. A fact she proved by embarking on a show-stopping North American tour that showed that this particular Electric Lady sure did know how to get down.

While Janelle started out as our golden girl, the response to Beyoncé was a bit more mixed around these parts. It seemed that 2013 would be hers for the taking. She kicked it off by singing the national anthem at President Barack Obama's second inauguration,headlining the Super Bowl and airing her documentary, Life Is But a Dream, on HBO. But as magnificent as that all was, there was still plenty of side eye to go around. We learned that her national anthem was more Memorex than real (though she did shut folks up with a live rendition at a press conference) and she released buzz single "Bow Down/I've Been On," which didn't exactly set the world on fire. Of course, though, this all fueled speculation that a new Bey album was on the not-so-far horizon. By April, she was the star of two commercial campaigns that boasted two unreleased tracks that were rumored to be on her forthcoming project, "Grown Woman" and "Standing on the Sun." Yet, even with all this action going, there was nothing confirmed and concrete and Bey's public was getting restless with all the teasing.

Unfazed, Bey continued on with the first phase of her widely-praised Mrs. Carter Show world tour and teased fans with choice performances of "Grown Woman" and "Standing on the Sun." Little did they know the secret that Queen Bey was hiding. While her tour was blazing stages worldwide, the Houston-bred superstar was filming videos all over the world as she prepared for her most shrewd move yet. At midnight on Friday, December 13th, the multi-hyphenate singer played Jason and unexpectedly dropped her self-titled fifth album BEYONCÉ and effectively broke the Internet as her fans cried, screamed, ranted and, most importantly, downloaded the album at a record-setting pace. Even without the sales, though, BEYONCÉ would've been a success. The visual album found Beyoncé finally breaking through her rehearsed facade and revealing the woman behind the hits. Though not flawless, it found her taking calculated risks and showcasing a sensuality and warmth that previous releases only hinted at. From "Blow" to "Blue," "Haunted" to "Heaven" and "Pretty Hurts" to "Partition," it was nothing less than a impressive coup from Queen Bey.

Through approaches both overt and clandestine, our two Woman of the Year honorees strove for greatness -- and found it -- by making music their way, without compromises, regrets or excuses. The fact that both albums excelled expectations is no accident. These take charge ladies made sure of that. Playing the game by their own rules, they let it be known that 2013 was, without a doubt, the Year of the Woman.