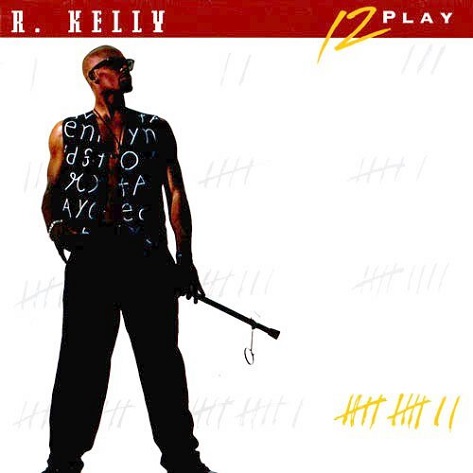 Timing is an interesting thing. When deciding on what albums would make the Class of 1993, it seemed a no-brainer to include R. Kelly's 12 Play on the list. It was, after all, one of the most memorable R&B albums of that year. As well, though not forgotten, there had been enough time between now and the alleged illicit misdeeds he performed with underage girls as to not make writing this piece...uncomfortable. But then Kells had to go and release the raunchy, sexually explicit Black Panties and dredge up all the dirty memories that we have of the infamous trial and the ugly side of his stardom that was exposed to the public because of it. And then soon after, Village Voice published a scathing exposé about the sexual assault case and the resulting scandal surrounding it all. With all these swirling around, is it really possible to take a look back at 12 Play, the sexually-charged solo debut of Kelly, without seeing the stain of what we know about the man today?

When 12 Play arrived in stores, I was an 11-year-old kid who was, despite me watching more than a few rated R movies that I probably shouldn't have, still mostly innocent to the bedroom behaviors of grown folks. For kids our age, the forbidden fruit of these songs obviously intended for adult ears was utterly fascinating. Songs like "Bump 'N Grind" (and its even better, even freakier "Old School Remix"), "Your Body's Callin'," freak-nasty opus "Sex Me," the title track and "Homie Lover Friend," were the soundtrack to our fast-assed lives. We would sing the lyrics out of earshot of our parents and teachers and grind to the songs during school dances while others shielded offenders from the eyes of chaperones. I'd be lying if I said revisiting songs like those didn't bring back fond memories.

But then I get to songs like "It Seems Like You're Ready," and a certain creepiness starts to set in. Yes, on its face it's another song with R. trying to get into a lady's pants. However, the track could easily be interpreted as prelude to statutory rape, especially with lyrics comparing a woman's body to a playground and using such sophisticated sexual euphemisms like "go all the way." And the creep factor isn't made any better on the songs that follow, "Freak That Body" and the ludicrously-titled "I Like the Crotch on You." Both attempt to latch on the last gasps of New Jack Swing and come off as crass and, ultimately corny. Even the light-hearted, The Gap Band-sampling "Summer Bunnies" has more than its fair share of side-eye worthy lyrics.

Outside of the sex songs, though, 12 Play did have at least one moment not about his libido. "Sadie," his cover of The Spinners' "Sweet Sadie" was sang as a heartfelt tribute to his mother. It was a rare moment that R. Kelly dropped his freaky guard to reveal that there might be something more to him that a want to have sex. However, its placement on the set -- after the posturing of "Back to the Hood of Things" and just before the debauchery of "Sex Me" -- is a bit questionable (not to mention that the "Homie Lover Friend" remix finds the singer calling the girl he's looking for "some kind of Sadie").

It almost seems unfair that we can't look back on R. Kelly's early discography without the taint of present day coloring it, but a lot of that is Kelly's fault. Even after his controversial 1994 marriage to then-15-year-old Aaliyah and the 2002 sexual assault trial, R. Kelly himself almost wants to rub the public's face in his alleged misdeeds. Soon after his acquittal, he was calling himself the "Pied Piper of R&B" and now he's settled into the self-appointed role of "Cookie Monster," two juvenile references that cause some pause when considering the whole picture. So while 12 Play is admittedly packed with certifiable hits and undeniable slow jams and it does have some distinct memories for me, it's no longer an album that I can revisit without questioning if the effort was truly intended for the grown as well as the sexy.


TAGS:  aaliyah, Class of 1993, r. kelly, the gap band", the spinners
Previous: Jamaican Sensation Tessanne Chin ‘Usains’ The Competition & Wins ‘The Voice’ Next: Morning Soul: You Need To Sit Down, This May Take Awhile