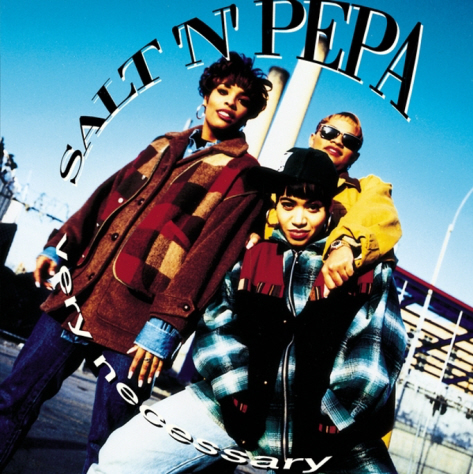 On avenues of hot, cool and vicious, Salt-N-Pepa reside. Sure, they were the female's answer to Run-DMC, as they possessed snarky fireball rhymes and an impeccable style that was desirable to covet. But back in 1986 when the trio had all ears towards them after the mega-smash of "Push It," the lasting power of the female crew from the heart of Queens didn't seem a possibility, especially when hip hop was (at the time) a strictly male-dominated institution. Flash forward to 1993 and you better believe a lot of crow pie was seasoned and consumed as not only had Salt-N-Pepa surpassed their assumed expiration date but were still racking up hits, spitting out spiky rhymes and were still, well, very necessary as their fourth album boldly proclaimed.
Center

Female rappers weren't a rarity at the time Salt-N-Pepa (then a duo and going by the moniker of Super Nature) gave a curt response to Doug E. Fresh and the Get Fresh Crew's "The Show" back in 1985 with their official debut single "The Showstopper." We can't forget the earlier spoken word tell-it-like-it-is tales from Millie Jackson. Or Teena Marie introducing a boastful rhyme about hot cornbread and Nikki Giovanni to the R&B lovers and b-boys on "Square Biz." Or dismiss Blondie for recruiting Fab Five Freddy to bring hip hop to the White mainstream with the mysterious tones of "Rapture." Nor forget to honor the underground dames who spit rhymes in dimly-lit clubs and on crowded inner-city street corners. Women have been immersed in hip hop from day one, but Salt-N-Pepa put the idea out of women being a viable asset to hip hop and its culture into serious consideration, making it not just a "aw, how adorable, it's a girl rapping" moment but something that was essential to expanding hip-hop's foundation. Here were three women -- Cheryl James (Salt) and Sandra Denton (Pepa) who let the rhymes roll while Dee Dee Roper (Spinderella) felt the spin of the black wax on DJ duty -- and they set the tone, the attitude of how women's voices were to be heard and accepted in a music genre draped in male favor.

When Salt-N-Pepa came out with "Push It" in 1986 the spark now became flame, as they came busting out with such spunk it would prove the main formula that would have them coasting through the late '80s into the '90s with pot boiler after pot boiler like "My Mic Sounds Nice," "Shake Your Thang," "Get Up Everybody (Get Up)," "Do You Want Me" and their biggest heavy-hitter "Let's Talk About Sex." But to me, after having those successful singles and three equally popular albums, Very Necessary is where this trio truly hit their stride and perfected the game they had been crafting since day one, and it lead to it being their most accessible and successful album to date.

Salt-N-Pepa still retained their sense of self-awareness and were still all about female empowerment, even right down to them being fully in charge of producing the bulk of this album, with producer Herby "Luvbug" Azor continuing as a co-hort. Yet they adopted various new styles that gave them the most diverse album of their careers. Dancehall reggae boldly opened up the album on the funky "Groove Me" and was also stirred in the sultry sauce of "Sexy Noises Turn Me On." Jazz boom bap is also laced in spots, most prevalent on "Big Shot" and "Break Of Dawn." Even the mainstream pop/R&B sound they had touched upon in their early years (most notably on 1990's Blacks' Magic) really comes into focus as the melodic and catchy natures of "Shoop" and "Whatta Man" gave them their biggest singles since "Push It," both hitting the Billboard pop chart at #4 and #3, respectively. "Whatta Man" was just a smart move from jump as it made good use of Linda Lyndrell's 1968 Stax classic add to that En Vogue's appearance to heighten the sisterhood power and it's just all around great. Also we cannot forget the video with Tupac and Treach from Naughty By Nature (also Pepa's beau at the time) making appearances cementing it's iconic R&B/Hip-Hop criss-cross status.

Hardcore rap fans wouldn't appreciate Very Necessary due to all the accessible singles and dangerous dame attitude that covered the album, because it commercialized and softened hip hop, but really I don't care. I liked the fact that "Somma Time Man" grooved in all the right places, that "No One Does It Better" coasted fluidly on remnants of New Jack Swing and that the GRAMMY-winning, "None Of Your Business" was tart in its delivery but smoothed its edges by utilizing a well-placed Staples Singers sample.

I also like how Very Necessary is in pure '90s fashion by being socially aware and having songs that borderline like all the PSA's I saw in-between Saturday morning cartoons. My favorite of the bunch, "Heaven Or Hell," couldn't be more straightforward in its raw discussion of urban social upheaval. Even when we get the sole bedroom ode on the record, the slinky good "Sexy Noises Turn Me On," right at the tail end the act of protection is mentioned and it's either genius or a real buzzkill depending on your viewpoint. I also don't mind that Salt-N-Pepa continue to trumpet the awareness towards the growing epidemic of AIDS as after the controversy of "Let's Talk About Sex" (and its morphing into "Let's Talk About AIDS") they lean back in with "I've Got AIDS", to drive the point home further as the disclaimer in the beginning suggests and as the harrowing dramatic dialogue persists. This was pretty clever to do, especially since impressionable listeners who may not hear these discussions in the home, got to hear them first hand from our favorite music acts.

And to repeat myself, I will forever love how Salt-N-Pepa were all about being strong females, and how they weren't afraid to smear their brand of feminism in anyone's faces. Seeing the visuals for "Shoop" and "Whatta Man" really resonated with me way back then. Who were these cool women with words that were equivalent to wagging a finger but also exuded sexually empowerment? Their uninhibited nature was just so real to me that I'd be lying if it wasn't an influence on me today.

After Very Necessary's success cooled down, so did the group as they found themselves unfortunately in a legal tussle over royalties with none other than their long-time collaborator Azor. They returned on a new label and in 1997 released their last album Brand New to moderate fanfare due in part to their new label having a bankruptcy fallout. In the following years, Spinderella went on to be a radio personality, while Salt and Pepa became reality show stars on VH1's The Salt-N-Pepa Show. In the present they have re-grouped and took to headlining a tour with fellow hip-hop icons of yore like Doug E. Fresh, Big Daddy Kane, Naughty By Nature, Kurtis Blow and Kool Moe Dee and, as usual, can play with the boys quite well. While they drafted the blueprint and opened the flood gates for other female rappers to have a voice in the industry it's almost odd now that female hip-hop crews are pretty much extinct, as is the female rapper game not as ground-breaking (apologies to Nicki Minaj and Azealia Banks) as it was back in the 1990s. Then again, I guess it is hard to top a group like Salt-N-Pepa with all their achievements and milestones, they, in more ways than one, set the bar stressing the unavoidable fact that they were and will forever be very necessary.