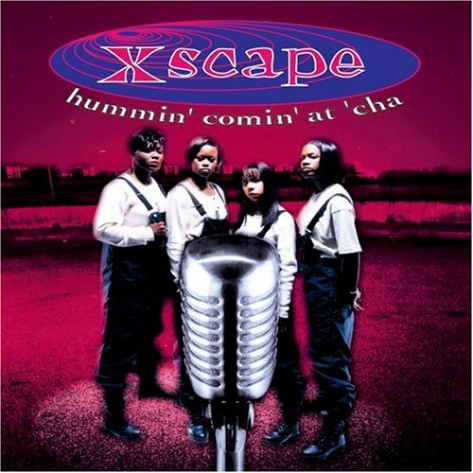 Xscape was in the right place at the right time when their debut single "Just Kickin' It" hit the airwaves in the late summer of 1993. Not only could Xscape sang, much like their sleeker counterparts En Vogue, but the latter group was cooling down from the crossover success of Funky Divas. The ladies also didn't shy away from the hip-hop-heavy beats and street styles that propelled acronymically named trios SWV and TLC to recognition, but both had already exhausted their debuts' biggest hits in the previous year and a half. And despite their masculine attire and swag, LaTocha and Tamika Scott, Kandi Burruss and Tameka "Tiny" Cottle could melt the candle they held to Jade's sensuality, but Jade to the Max had mostly made its loudest noise.

So the door was wide open for Xscape's fusion of gospel-inspired melodies and lyrical content juxtaposed with more secular themes. That helped push the debut single to No. 2 on the Billboard Hot 100 and made them stand out with Hummin' Comin' at 'Cha.

But even with their blended appeal, they had a style all their own. "Just Kickin' It" started things off with a laid-back feel that -- regardless of if you were bumping the original version or the remix -- forced you to feel good. Provided you could get past what some considered sexist lyrics ("Every man wants a woman/ That can cook him up a good meal") -- and to be fair, not everyone could -- "Just Kickin' It" grooved hard by being smooth, not over the top and naturally mellow -- traits that accurately described the group's approach to music. Jermaine Dupri's sing-along refrain of "Kick off your shoes and relax your feet" made its pop appeal playful. And who among us didn't think we were so funny when we sang "Kick off your feet and relax your shoes"? Ugh, we were dumb kids.

"Understanding," a stay-together jam, gave a nod to the church background of the Scott sisters with its Sunday sermon synthesizers and prerequisite of God-given talent needed to belt the big notes. How appropriate, given the reliance on institutional faith during times of struggle and weakness? Manuel Seal, Jr. -- year's before helping Mariah Carey pen "We Belong Together" -- blessed Xscape with a resounding "Hallelujah!" moment, pushing them to dig into the growling reaches of their vocal ranges and deliver an emotional bridge: "I tried so very hard to keep our love alive/ But if you don't want to meet me half way/ Then the understanding dies."

"Is My Living In Vain," also inspired by the church, was one of the "louder" tracks on the album. Missing were those growling notes so present on Xscape's debut, but it didn't weaken the otherwise strong declarations of faith.

A Quiet Storm love jam that was at once romantic as it is lustful, "Tonight" was to the brim with sweet longing and rip-off-your-clothes yearning -- and a much talked about accomplishment from Hummin' Comin' at 'Cha. What the song did better than its a cappella contemporaries was send chills up listeners' spines. It dealt less with maintaining or creating melody, instead embodying passion -- pleading for a lovers' rendezvous that bordered on the insistent, yet was hauntingly fragile and focused vocal abilities. It wasn't hard to tell upon first listen that this would be one of the group's defining numbers.

Xscape were also down to party. "Pumpin'" took notes from "Understanding" with its synth-driven intro that mere seconds later transformed into a hybrid of the then-fading New Jack Swing sound fused with that of the budding Flava beat. The result is a slammin' party joint re-told Tamika's envious, "Ooh, let me tell you, girlfriend" adventures at the hottest spot in town.

"Love On My Mind" kept things in motion, though in terms of lyrics, the inspiration was far rawer. The track -- reminiscent of those last-call walks around the club to find someone willing to go home with you -- found the ladies zeroed in on their individual targets, commanding, "Take me away on ecstasy/ I want to know how it feels to be loved." In the vein of "Just Kickin' It" was "Let Me Know," which borrowed a Dr. Dre bass line and added in reggae-style rat-a-tat-tat ad libs.

Hummin' Comin' at 'Cha kind of symbolized a starting point for the group's transitioning femininity, which was at home in a pair of Tims or heels. As their sound refined, this was the group at their most rugged and a bit rough around the edges -- a trait that is often on full display for Kandi and Tiny as they've starred in reality shows The Real Housewives of Atlanta and T.I. & Tiny: The Family Hustle, respectively. But that thug appeal the group's members brought to the forefront also brought with them an admirable hustler's mentality, as members grind on with individual projects.

Most notable for this is Kandi, who released a solo record in 2000, Hey Kandi, which gave us "Don't Think I'm Not." She also wrote or co-wrote big songs for TLC ("No Scrubs"), Destiny's Child ("Bills, Bills, Bills") and Pink ("There You Go"), which earned her an ASCAP Songwriter of the Year Award in 2000. Heck, she even turned the unexpected (and unexplainably likable) tune "Tardy for the Party" by RHOA castmate Kim Zolciak into a hit. Though she suffered the loss of her fiancé A.J. in 2009, she distracted herself by parlaying Xscape's racier sex talk into a radio show, Kandi Koated Nights, which spun off an album with a similar name and a line of, ahem, adult-oriented products.

Meanwhile, Tiny manages to turn a thug into a househusband and is raising -- well, even we can't remember how many kids make up her brood with rapper T.I.. LaTocha keeps herself in the minds of music fans with limited-release solo material and appearances on cuts performed by the likes of Trick Daddy and a one-season appearance on R&B Divas: Atlanta. Even Tamika, seemingly the least active since the group split, has a few Tyler Perry-associated acting and songwriting credits.

Though a bit intimidating at first (come on, "gang" bandanas and that boxing posture on the album cover?), Xscape became a source of endearment for fans of R&B. Hummin' Comin' at 'Cha was intriguing because of content that was far beyond the years of those performing it, but they tackled it with confidence, vulnerability and sincerity. Hummin' Comin' at 'Cha took the hard-or-smooth approach to gaining entry into the marketplace but carved out a distinctive niche for Xscape while keeping them in line with the confident women who filled out the rosters of other girl groups. Hummin' sounded right on time. Thank goodness the door was open.