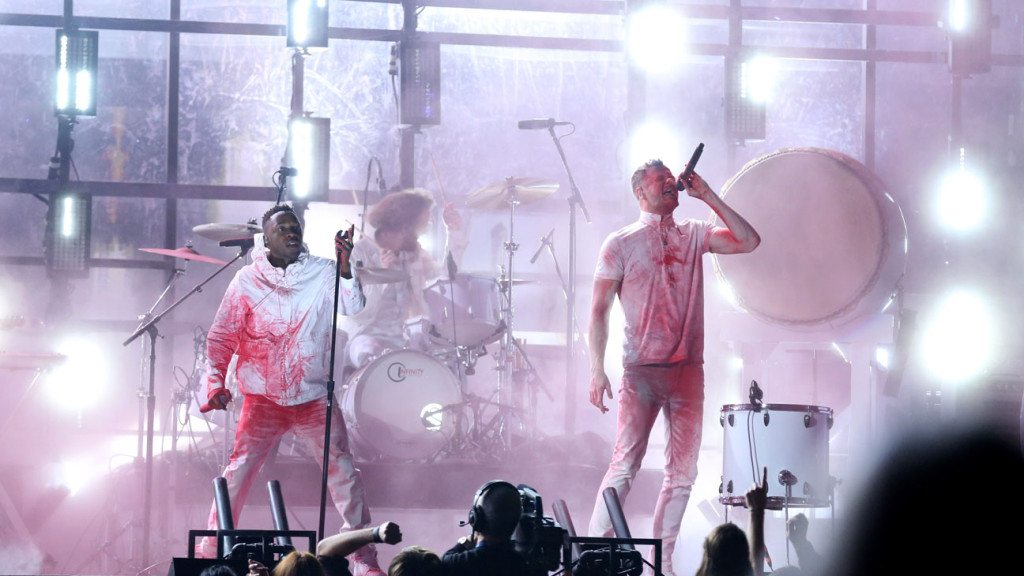 This year's GRAMMY Awards were full of one too many piano recitals, unnecessary shots of Taylor Swift dancing and an awkward shout out to Jay Z and Beyoncé (here's looking at you Jamie Foxx). We'd already seen some pretty decent GRAMMY performances last night, and then Kendrick Lamar and Imagine Dragons took the stage. Compton's finest joined creative forces with the Las Vegas group to execute one of the best rock and hip-hop mash-ups since Jay Z and Linkin Park.  The performance began with Imagine Dragons' frontman Dan Reynolds calmly singing the first verse of their GRAMMY nominated song "Radioactive," only to be disrupted by a loud "yak yak yak" from Kendrick's song "m.A.A.d City."

The all-white stage then  turned red as the band started head banging for their lives. As Kendrick rapped a mile a minute, Imagine Dragons accompanied the rapper by pounding on the giant drums that decorated the stage. The collective blew the audience's mind, unexpectedly flipping back and forth between the two songs. The performance, which was almost drowned out by a screaming audience, was itself worth a GRAMMY (read: gold sippy cup). It was a contemporary masterpiece that joined two separate worlds and, at least for the night, made them one. Not only did their energy explode on stage but so did some red powder, which left the white-clad performers looking like extras on Dexter. Luckily, Imagine Dragons nabbed a GRAMMY for Best Rock Performance, but after seven nominations, Kendrick didn't collect any as Macklemore bagged up most of the Rap categories and Best New Artist. It's still a mystery even to Macklemore, however, Kendrick and Imagine Dragons easily won best performance of the night.