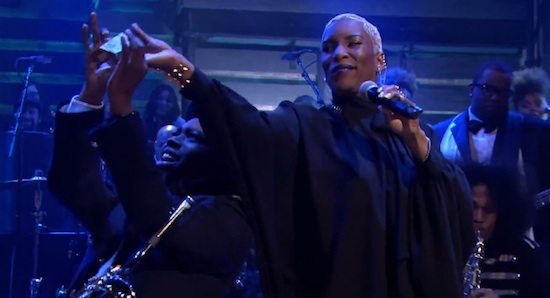 Our nights spent staying up past our bedtimes to see Late Night with Jimmy Fallon are drawing to a close, but he's going out with a bang in these final weeks before he takes over the reigns at the Tonight Show. Take last night for instance, where the big bang came from the musical guest's direction. Soul sanger and supporting vocalist in Prince's band, Liv Warfield, stood in with The Roots all night long before adding a cherry on top with a rousing performance of her current single "Why Do You Lie." To say that she slayed is putting it mildly. Joined by a full band, including a massive 10-piece brass section, Liv got down with the get down and delivered not only an excellent vocal performance but added in some choreography and dramatic interpretations of the lyrics acted out with the baritone sax player.  Now THAT'S how you make your television debut. Look out for Liv's sophomore album, The Unexpected, produced by the Purple Yoda himself, when it's released on February 18th.