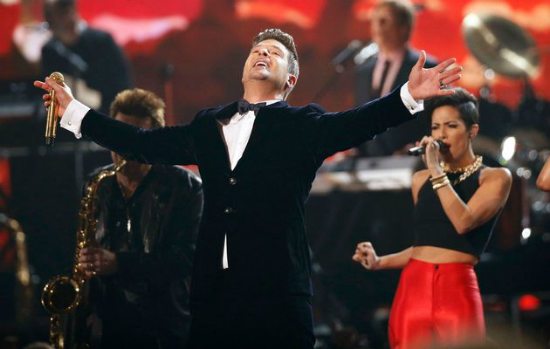 We all know that the GRAMMY Awards telecast has become more about the performances than the awards, with the major being presented during the pre-telecast ceremony, so we can’t even get upset when our favorites lose or aren’t nominated. But my favorite parts of the show are typically the times when artists venerated and new come together for one-night-only show-stoppers. This year had a special treat for those who love their soul with blue eyes as the band Chicago joined forces with Robin Thicke. The celebrated progressive rock/jazz fusion band with the amazing horn section started with their hits “Does Anybody Really Know What Time It Is” and “Saturday In The Park.” Robin’s took on one-time Chicago lead singer Peter Cetera’s vocals with the greatest of ease and gave these jams a new life.  The transition from '70s airy pop to contemporary R&B went smoothly as they transitioned to Thicke's GRAMMY-nominated hit “Blurred Lines.” It was refreshing to see this song performed so well and with the class brought by Chicago. This was a combination that will be remembered for years to come.