‘Can You Feel’ The Jacksons On ‘The Arsenio Hall Show’? 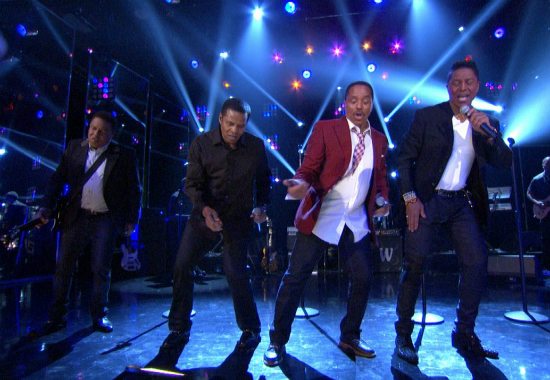 How many of us can say we’ve had The Jacksons perform for us on our birthday? That’s what happened last night on The Arsenio Hall Show when the foursome stopped by to sing their classic hit “Can You Feel It” for Arsenio Hall's birthday celebration. The Jacksons also sat down with the freshly 58-year-old host. During the interview Arsenio opened a musical time capsule when he got the brothers to sing “ABC,” “Dancing Machine” and a little of “I Want You Back” a cappella. Where things went wrong, however, is when the group got up to perform. The harmonies and background vocals were fine, but the lead vocals at times were hoarse or barely audible. Perhaps they wore themselves out dancing, which by the way was the highlight of the show. Let’s be clear, The Jacksons and their legacy are incomparable, but could we feel their performance? We can’t say yes. At least Arsenio got something out of it; he was gifted with a framed platinum album plaque of Jackson 5 hits. If you’re looking for a live blast from the past, The Jacksons will perform 40 shows at Planet Hollywood in Las Vegas starting on February 20th. The brothers also announced they have a new album in the works. Let's hope that they get some vocal rest and lozenges before recording it. While we wait for this new material to surface, check out their performance and interview with Arsenio.


TAGS:  arsenio hall, jackson 5, The Arsenio Hall Show, the jacksons
Previous: You’ll Want To Give denitia and sene. A ‘call’ Next: Jhené Aiko Brings Her Best ‘Worst’ To ‘Conan’