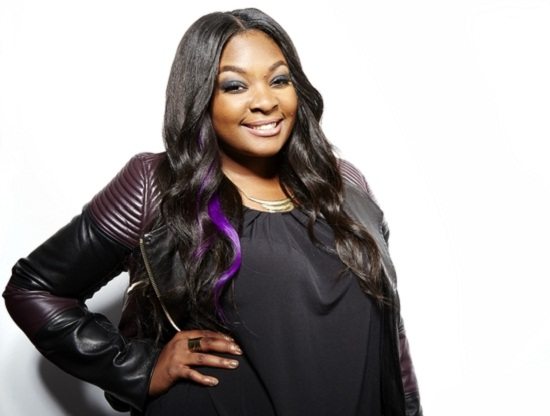 It's been nine months since Candice Glover was crowned the winner of American Idol's 13th season. While the fighting between then-judges Nicki Minaj and Mariah Carey threatened to upstage her big moment and the lengthy space between her win and the release of her debut threatened to drop the vocal dynamo into obscurity, her talent and her sheer determination showed that Candice was here to stay. The singer took some time to talk with us about her  album, her journey and that infamous glitter moment that she shared with Mariah. Keep reading to see why the budding diva aims to make her mark with Music Speaks.

SoulBounce: What can we expect from Music Speaks?

Candice Glover: More than anything just an album about love. It's about different sides of love. It's my first album, my first chance to work in a professional setting in a studio with all these great people. I think it's similar to things I did on the show but also at the same time it's very different and more of what I wanna do and I'm very excited about that.

CG: Honestly I don't know. I gave her so many shout outs on the show and she's my favorite singer in the whole world. I think she watched the show. She sent some songs over to the label and they sent them to me and I fell in love with all of them but that was my all time favorite one. I still haven't gotten the chance to meet her but I really would love to.

SB: "Damn" is a song that takes a slightly controversial side of a relationship. How'd that come about?

CG: That song was actually written by Rock City, Taron and Timothy, the guys who wrote "We Can't Stop" for Miley Cyrus. They showed it to me and that was the weirdest part of love that I had ever heard of and I'd never experienced that, of course, so I Didnt know how people were gonna take it. But as I thought about it more, it's actually something that does go on in the world. It's on Scandal, Being Mary Jane and a lot of people are familiar with that situation. It somehow ended up online and everybody loved it, so I'm really proud of that song.

SB: What else can we expect from Music Speaks? Is it a ballad-heavy album or will we get some more upbeat tracks?

CG: I think more than anything I wanted to still show the versatility that I showed on the show. There are a couple of uptempo songs that'll get everybody going and there's some midtempo songs and some slow jam songs and some pure R&B songs and some ballads. I think y'all have heard the two ballads that are on the album. I just wanted to show that I'm capable of doing every different type of music. I didn't want to just do R&B because I didn't want to put myself in that box. I wanted to be more of a soul singer. I think everybody can expect that and they can expect to connect to at least one song on there. Everybody's been through all the different types of being in love or having a crush on somebody. My album talks about all of that. I think people will like it. I'm excited about it.

SB: Music Speaks was originally supposed to come out last summer. How'd you initially feel about the album getting pushed? Do you think it's been a blessing?

CG: I won on May 16th and then July 16th, exactly two months later, it was supposed to come out. I was happy about that because we were trying to get it out while people were still paying attention. But then I thought about and, being the perfectionist that I am, there was no way in the world that we could put out an album in two months that was actually up to what I wanted it to be. But at the same time I was kind of nervous because I thought people would forget about me and no one would know who I was by the time I wanted to put it out. But I rather put out an album that was good quality and have it later on than rush and put out an album that's not good quality at all. So, between that time period, I've had a chance to get a lot better songs and songs that I actually like and I wasn't just doing because we had to rush to put it out.

SB: Last year at the Soul Train Awards you were a part of the Dionne Warwick tribute. How'd that come about and what was the moment like for you?

CG: I'm not sure. A lot of the things I'm a part of that I can't believe I'm a part of I don't know how they happen or how they even know who I am. [Laughs] But I'm definitely blessed to be a part of everything I'm doing. Dionne Warwick was really excited that I was a part of it and she came up to me and told me she loved when I sang her song Don't make me over on American Idol. It was a great honor to pay tribute to her and she's sweet.

SB: Speaking of American Idol, a lot of the talk surrounding your season was about the feud between Nicki Minaj and Mariah Carey. But you were also a part of one of the most talked about moments when Mariah Carey glitter-bombed you on stage after your performance. What was that like? Could you believe it happened?

CG: [Laughs] First of all, when I sang [The Cure's] "Love Song," I didn't know that people were gonna love it the way that they did. But the week before was Rock 'n' Roll week and I didn't do as well as I wanted to, so I felt like I had to come out with something big. But I didn't expect it to be that big. I didn't expect them to say everything that they said about it. So, when Mariah was approaching me, I thought she was gonna give me a hug, so I open up my arms and then she just tossed the glitter. When I watched it later I saw her pick it up off the judge's panel, so I knew what she was gonna do then. But at the time I was so surprised and I started crying. But I cried every week, so that was nothing new.

SB: That was definitely a moment to go down in history.

SB: One of the great qualities about you as a singer and as an artist is your perseverance. You auditioned for American Idol multiple times before you made it to the big show and then took your season. What kept you going?

CG: I knew that I could sing. For some reason I was going through a hard time because I could understand why I kept getting cut. I was show them that I was different and all of that and I didn't really know what was happening. But I knew that if I kept going, it would happen for me. I'm from a small town, so I would sing at weddings and restaurants and places like that, but I just knew that there was more out there for me. For some reason, I just couldn't stay away from American Idol because I felt like that was the platform to get me where I wanted to go.

SB: Can we expect any guest appearances on your album?

CG: It's gonna be mostly me. I worked with a lot of people in the studio, but there aren't really any collaborations at this point. But I would love to get people on remixes and, on my next album have different people on there. But right now, it's just me.

SB: Who would you like to work with in the future?

CG: I really want to work with Brandy. I think Brandy is really amazing. I've kind of worked with Jazmine Sullivan already, but I would love to work with her in the creative process, like in the studio with her and seeing how she works because I've always been intrigued by her. We got a chance to go in the studio with Mariah while we were on the show, but I would love to work with her a little bit more. Christina Aguilera, too. Christina is actually the reason I started singing in the first place.

CG: Yeah, I was nine or ten. I've been singing since age four, but I heard her and I wanted to be exactly like her.

SB: Who's made you the most star struck since everything has happened?

CG: I actually had a chance to see Tamela Mann do a rehearsal and that was the most impressed I've been just to see somebody rehearsing and see how electrifying she is even just at a rehearsal.

SB: What do you want people to remember the most about you?

SB: What makes you happy about music?

CG: Music makes me happy as a whole. The reason why I named my album Music Speaks is because music says what you can't say sometimes. Regardless of what it is, relationship or what you're going through. Even school or whatever it is, your job, I think music kind of speaks for you when you're scared to say something or don't wanna say something. That's what I love about music and that's why I'm into it. And I think soul music actually does that more than anything.