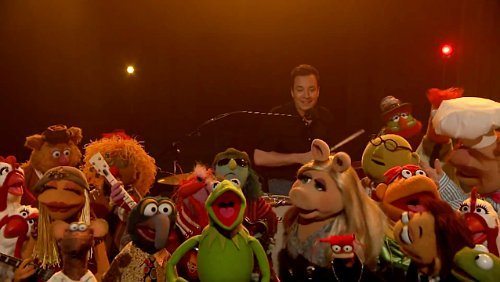 Jimmy Fallon leaves Late Night with Jimmy Fallon and enters a new era as he transitions to The Tonight Show Starring Jimmy Fallon. What’s the difference you ask? Well he moves up a time slot, gets a bigger stage and almost certainly a bigger audience. To culminate his show, Fallon enlisted the help of The Legendary Muppets Crew. Performing “The Weight” by The Band, Fallon sang with the furry crew for a sweet, sentimental and harmonious rendition of the '60s classic. With Fallon on drums, the performance was the perfect ending to the show that featured Fallon performing with some of the greats like Bruce Springsteen and his friend Justin Timberlake. The performance ended with Fallon walking down an empty hallway and through the doors of The Tonight Show Starring Jimmy Fallon, where an excited crew and audience welcomed him.

The Roots, led by Questlove, will thankfully serve as The Tonight Show band as Fallon takes over for twice-retired Jay Leno as host of the late night franchise. The Tonight Show Starring Jimmy Fallon makes its debut on Monday, February 17th. We hear Will Smith will be Fallon’s first guest and the show will be blessed with a performance from U2. As we await the premiere, watch Jimmy's last performance on Late Night with the outwardly fuzzy crew, which will likely make you feel the same way inside.